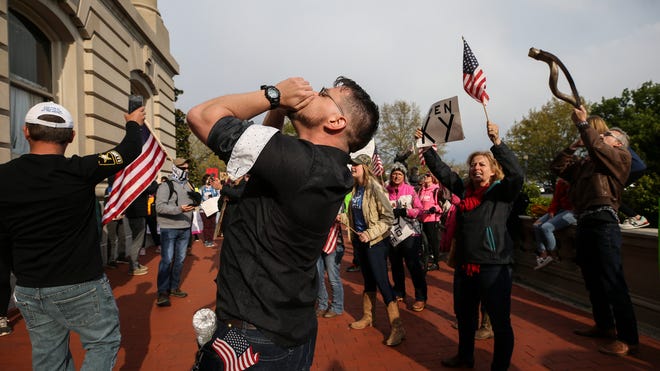 The patriot rally organized in Kentucky attracted over a few hundred protesters. Kentucky Governor Andy Beshear said that he would not be intimidated or bullied by the protests.

Some protesters were armed even though they did not resort to any violent acts near the Kentucky capitol.

The patriot group advertised the event in their facebook group “United Kentucky” and said that this would be the biggest patriot rally in the state ever. However, only a few hundred protesters turned up for the event.

Interestingly, the protests were organized when both the chambers of the General Assembly were in session in the Kentucky Capitol.

A one-armed protester was seen carrying zip ties attached to his backpack. He told the media that he carried them as he felt it may be needed in case something goes out of hand during the rally.

The rally comes days after the riots at the US Capitol that were severely criticized by several world leaders. The incident left a black mark on US democracy and the actions of Trump was condemned by all the former presidents of the US.

The recent riots at the US Capitol were so severe that it left 4 civilians dead and one police officer who was injured during the riots also succumbed the next day.

The rioters managed to break through the security barricade at the US Capitol on Wednesday and they stormed inside the Capitol that was filled with lawmakers and senators who were busy with counting the electoral college votes.

The rioters at the Capitol damaged furniture and broke glasses at the Capitol. They also assaulted the security forces and the police officers had to open fire to control the crowd.

One woman was shot dead at the spot and other three people succumbed due to medical emergencies during the riots.

Kentucky Governor said that the state would not be intimidated as America is counting on the real patriots who condemn hate and terror.

The speakers at the rally said that the intention of the group was not to incite violence and they were tired of what was happening in the country.

The event was also peaceful and acts of violence were reported by the police. No participant tried to enter the statehouse during the rally.

Apart from that, several speakers also condemned Kentucky Senators Rand Paul and Mitch McConnell along with Governor Beshear for the executive orders during the covid pandemic.