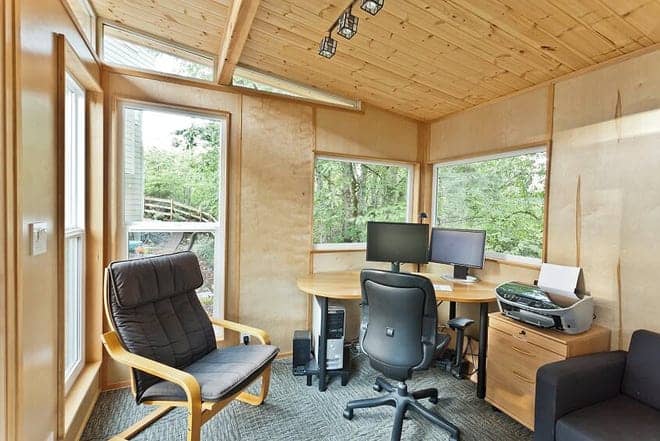 Many people across the country are now making the best use of their backyard sheds. Working couples are converting their backyard sheds into home offices during the pandemic. As most people are stuck to working from home since the last few months, they are looking at such options.

A couple in Colorado wanted to separate their work environment as it offers them flexibility while working from home. They say that as they cannot go to coffee shops or other places, they have very limited opportunities to leave the house, and they get confined to their living space for a long duration. This made them realize that they needed more space, so they ordered a prefabricated backyard shed.As the corona virus pandemic is not looking at stopping in the next few months, many Americans are buying such sheds, or building backyard sheds so that they can be used as home offices.

It provides them with a comfortable space where they can stay away from children, and even children can focus on their studies as schools are opening to remote coaching in this season. Others opt for such solutions as they have no other option at home to set up an office space. Shed buyers say that such self-contained spaces are more practical, and they are also cost-effective compared to taking a full-scale construction project. The trend is growing since April when the pandemic forced millions of employees to work from home. As the school season began in August for remote learning, the trend increased further as most parents now wanted a separate enclosed space for working from home.

Companies that are into manufacturing such sheds say that the trend is picking up fast, and usually, there is a 50% rise in demand for such sheds during the months of summer. However, this year has seen a 400% increase in demand for such projects in summer. The company executives say that they are able to assess the demand by checking the downloaded catalogs from their websites. As most companies are now giving the option of working from home for its employees, many people are looking for suitable options where they can have a comfortable working space at home.

In the initial days, most people used laptops at home, and they used to manage it on their kitchen countertop or the dining room table. But they are now growing tired of such temporary arrangements and looking for permanent options that can offer a comfortable working space. Shed makers say that such detached office spaces are not like the usual metal sheds you get at Home Depot. You can get customized solutions, and customers can choose the placement of windows, style of wood, and other options according to their requirements. In this way, each aspect is tailored to suit the requirements of the consumer.

The shed makers then use the services of independent installation companies to finish the installation of such sheds. According to companies that are involved in the manufacturing of such sheds, most people are looking for spaces in the range of 120 square feet. They also said that such sheds’ trend began growing since March, and it has continued to spike in recent months. While most people choose such options for their home office, others are also using it for school rooms for kids. Some people are also converting such spaces into home gyms as they are not able to venture out during the pandemic.

Manufacturers ship the flat packaged kit to the buyers, and they can later be installed in any place of their choice. The price is in the range of $120 to about $180 per square foot, and it depends a lot on the size of the room and other amenities in the room. On an average, the entry-level series starts at around $10000 for such a ready to use shed. However, this is significantly lower than what it costs to build such a shed on your own. When you hire a building contractor, you have to spend on the building materials and pay the workers to get the task done. In this situation, the cost can go as high as $70000 in most cases. Many people are able to save lots of money by choosing such backyard sheds that offer better convenience and flexibility than the permanently built spaces.

Another advantage for buyers is that the shed rooms come with electrical outlets that are the basic needs for a home office space. In this way, there is no need to spend additional money on such electrical works, and everything you need will be integrated into space. Not only that, you can also include mini splits for AC and heating in these sheds. These modern-day sheds are of premium quality, and they can easily last for many years without any hassles. Experts in the industry say that it takes around four to six weeks to manufacture such customized sheds. If you are looking for a larger space, you may have to wait for some more time to get the sheds.

Some people are also making the best use of their time by building such sheds on their own. A couple from Kansas built their shed on their own with the help of their neighbor. They now use the 120 square foot space as their office. They bought the supplies from Home Depot and Menards and started working on the project on their own. They said that it cost around $5000, and this included the office furniture bought from IKEA. They said that the most challenging part of the project was digging the 18-inch deep trench from the house to shed to accommodate the electrical wires.

Such sheds will continue to be in good demand in the near future as the pandemic is yet to slow down, and the trend of working from home may continue for the next few months. In the future, this may also become a new norm to have a working space at home.