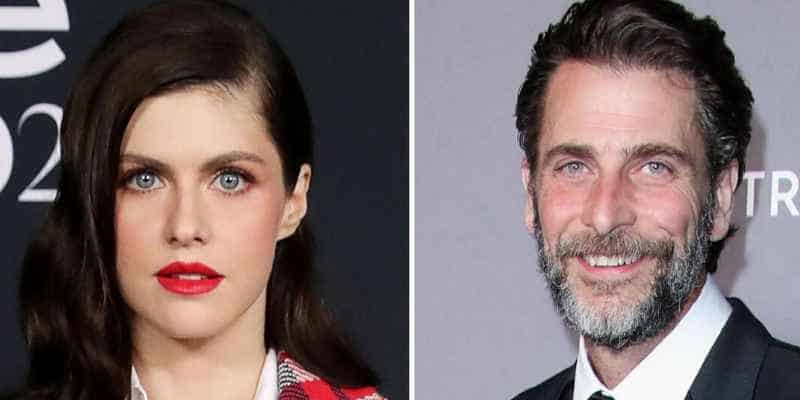 Alexandra Daddario is super happy nowadays as she has found the love of her life in her fiancée Andrew Form. In her recent Instagram post, Alexandra Daddario was spotted with Andrew Form kissing him on the cheeks, and in the same photo, she was wearing a diamond ring on her finger.

The actress us yet to give a nod to the confirmation of her engagement but her management team has confirmed that the actress is finally engaged to the producer Andrew Form recently she was also spotted wearing the same diamond ring in the public.

How Old Is Andrew Form? What Is The Age Gap Between Them?

There is another photo of Alexandra Daddario with Andrew Form which is in a black and white filter and she can be seen kissing him on his forehead. In the caption, there is just a small red-colored heart. The 52-year-old producer and the actress Alexandra Daddario were in relation for nearly one year.

Last year in May 2021 the news came out that the couple is dating each other. Now finally the news is confirmed that the loving couple is finally engaged. And are very happy with the start of their new love life. While talking about her relationship with her Boyfriend Andrew Form she said, “The most wonderful man, you handle nonsense, loss, life, difficulty, people, with grace and compassion,” she said.

“You’re a loving father, funny, hard-working, honest, introspective, sexy, kind, and sensitive- you’ve made room on some of the prime real-estate wall space for pictures of Levon, a dog you never even met. … You’ve taken the worst moments of my life and soothed them, just knowing that you existed when they happened makes my heart fuller and more pieced together. Right now I am looking at all the giant packages of gluten-free Oreos you surprised me with. It’s so many Oreos, it makes me laugh.” She concluded.

Alexandria Daddario is an American Actress born in the year 1986. She made her first television debut at the age of 16 in a daytime soap. Her first major role was in the fantasy adventure film Percy Jackson & the Olympians: The Lightning Thief where she played the role of Annabeth Chase. She also played a recurring role as Neal Caffrey’s love interest, Kate Moreau, which was in the USA Network procedural drama series White Collar.

The actress is known for keeping her life private and out of reach of even her fans. This was one of the reasons why the fans were shocked when she confirmed her relationship on Instagram in May 2021 last year. She added her photo with Andrew Form with the caption which read “It was dark and cold and rainy today, a terrible combination, and it didn’t make it warmer to wrap him up in my arms but it did make it all seem lovely and nice and joyful.”

As we previously told you that she likes to keep her relationships private, there is no official confirmation about whom she was dating before Andrew formed. Anyways the actress seems to be super happy with her relationship with Andrew Form,