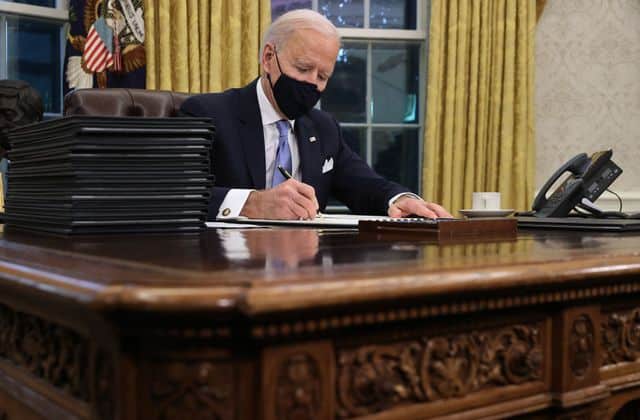 President Biden clarified his goal of reopening schools in person on Tuesday. Most of the K-8 public schools will be open soon with five days a week working schedule.

When president Biden was asked about the decision of in-person school reopening for one day a week, President Biden denied. He said that was a miscommunication and that the goal is to reopen public schools five days a week that too in person.

Many schools that are especially located in cities are conducting virtual classes.

White House press secretary Jen Psaki had reported last week that more than 50% of the schools would be reopened in person at least for one day in a week by the 100th day of Biden’s presidency. This has infuriated parents and have given the opportunity to Republicans as well to attack the administration.

However, on Tuesday, Biden described the statement by Psaki to be inaccurate and said that the goal is still to open most K-8 schools in full swing.

However, he maintained that the reopening of schools shall be attained by the first 100 days of Biden’s administration.

The debates also concerned the impact of the spread of newer and more contagious variants of vaccines’ coronavirus and unequal distribution.

Centres for Diseases Control and Prevention had released a report last week about the possibilities of reopening schools in person.

The report said that the schools can safely be reopened provided all the guidelines and safety measures are practised properly. Social distancing, cleaning the facilities, contact tracing, mandatory face masks are some of the necessary steps need to be taken.

Biden also added that while reopening of schools is on the goals, to be safer, vaccination of teachers can go up in the hierarchy. They should get the vaccinations on a priority basis.

The goal of reopening school applies to most of the K-8 schools. But the goal is not for higher schools.

President Biden has made it clear that the goal to reopen at least the K-8 schools also depends on the approval of the $1.9 trillion COVID-19 relief bill.

The COVID-19 relief bill has set aside around $130 billion for school reopening so that the sanitization, ventilation, and other necessary steps to contain the pandemic can be carried out smoothly.

Right now, the data is being collected by the US department of education to classify the schools that are functioning entirely in person, or are partially opened or may are conducting classes through virtual mode only. The statistics is going to help in achieving the goal.

According to Burbio’s data, 64% of the students are already attending at least some of the classes in person. Burbio is a company that collects school district calendars.

They provided the data and said only 35% of students are taking only virtual classes. Biden’s goal is already on the way.

Biden will guide the reopening of schools by following the necessary steps through an executive order. The executive order will direct the departments to collaborate with schools and produce a safer and clean environment.

Biden’s executive order is in strike contrast with the earlier administration, specifically with former education secretary Betsy DeVos, who said that this was not their responsibility.

Biden also assured the states to reimburse in full the cost of the necessary expenditure on the reopening of schools through the FEMA disaster relief fund.

This move is supported by teachers as well that were demanding such aid from the administration.