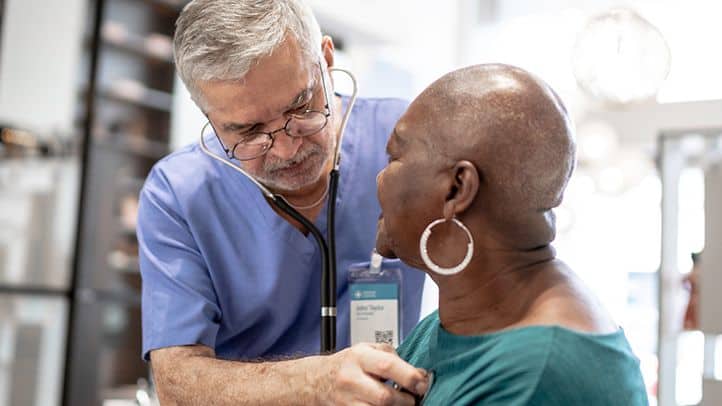 A bone marrow biopsy is the extraction of marrow from within the bone. Bone marrow is the soft tissue found within bones that aids in the formation of blood cells. It may be found in the hollows of most bones.

A bone marrow biopsy can be performed at a doctor’s office or in a hospital. The sample might come from either the pelvic or breast bone. Other areas are occasionally utilized.

A bone marrow biopsy differs from a bone marrow aspiration. An aspiration is a procedure that takes a tiny quantity of liquid marrow for evaluation.

According to a retrospective genetic analysis conducted by researchers at Vanderbilt University Medical Center and elsewhere, bone marrow biopsies may be performed needlessly in some African American persons who are genetically predisposed to have relatively low white blood cell counts.

The study discovered that an rs2814778-CC variation in the promoter of the atypical chemokine receptor 1-coding gene ACKR1 may cause reduced white blood cell counts. While this variation is relatively uncommon in people of European descent, it appears to be present in more than 60% of African Americans and is notably frequent in some Sub-Saharan African groups.

The study’s findings, which were published in JAMA Internal Medicine on Monday, highlight the limitations of attempting to extrapolate normal blood cell counts from a small number of populations, according to senior author Jonathan Mosley, a clinical pharmacology researcher at Vanderbilt University Medical Center, in an email.

Reference ranges for white blood cell (WBC) count or neutrophil counts, according to Mosley, are not adequately calibrated to broad demographic groupings, including many African Americans, and this leads to needless health care use in the form of excessive testing.

He and his colleagues used array-based genotyping data for 399 African Americans who underwent bone marrow biopsies at one of three medical institutions in the United States from early 1998 through the end of 2020 for their study. Their findings showed that the rs2814778-CC genotype, which has previously been associated with low white blood cell counts, was present in 67 percent of the people who were sent for bone marrow biopsies based on their medical history, in addition to low white blood cell counts.

In contrast, the rs2814778-CC genotype was found in all but one of the 35 patients who had bone marrow biopsies based solely on lower-than-normal white blood cell counts. Those findings suggested that testing may have been unnecessary in this small sample of patients, especially because 97 percent of them had normal biopsy results, compared to 55 percent of the 243 African American patients who did not have the rs2814778-CC genotype.

The study also highlights the need for broader white blood cell reference ranges that take the rs2814778-CC variant into account to avoid pathologizing blood cell counts that fall within the typical range for individuals carrying this genotype, according to Mosley, who noted that the variant is not currently genotyped as a routine part of clinical care in this setting.