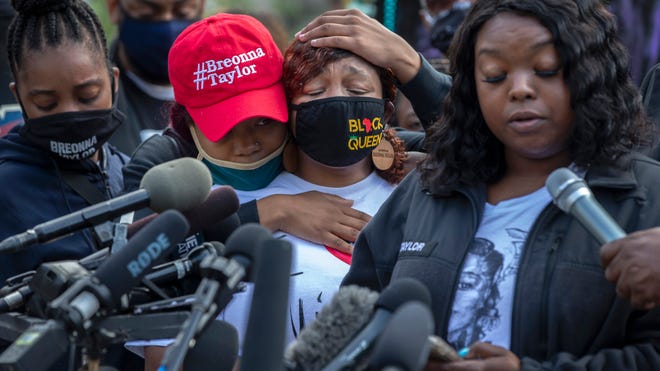 It is a few days back when the grand jury announced the final verdict, and there were no charges against the Louisville police officers who were part of the incident where Breonna Taylor was fatally shot. Now, the evidence of Breonna’s case is leaking digital news and social media sites. This evidence leads to raising questions on the investigation of hearing fatal death.

There is video footage that was reviewed by The Courier-Journal, and it is said that video was from the body cameras worn by Louisville police officers at Breonna’s apartment on March 13. The footage shows major violations of some policies designed in maintaining the integrity of the entire investigation. There was a video clip posted by the digital site VICE News on Saturday. In the clip, former Detective Brett Hankisonentered Taylor’s apartment, but investigators always focused on the working scene after Taylor’s death.

Former Detective Brett Hankison was among the three police officers who fired guns at Breonna Taylor’s apartment on March 13. Later, after the incident, Hankison was fired, and he was charged with wanton endangerment. The reason was some of the bullets fired by Hankison went into another occupied apartment, which was next to Taylor’s. Detective Myles Cosgrove, Sgt. Jonathan Mattingly and Hankison fired over 30 rounds soon after Kenneth Walker, Taylor’s boyfriend, fired one shot. Walker fired shortly after the officers broke into the apartment door, and they were serving a no-knock search warrant. Taylor’s boyfriend Walker later stated he didn’t realize, and he was not aware that it was the police. There was footage caught by a body camera, and VICE posted it. The clip shows Hankison shell casing on the ground, saying ‘that is theirs.’

‘That is ours, and it looks like that’ replied another unidentified police officer. After that, they told Hankinson, ‘back out now until we get the public integrity unit in here.’ But, Hankinson doesn’t look like existing right away. Instead, he asked, ‘Can you see any guns?’ and he started flashing a light into the apartment. He was even checking, ‘is it a long gun?’ At the crime scene, the presence of the former detective’s violated LMPD policies. These policies are intended towards keeping away the officers who are involved in shooting from the actual and active investigation. But, the evidence and video from Taylor’s investigation were earlier kept tightly guarded. Even after requesting, LMPD and Louisville Mayor Greg Fischer’s administration entirely refused to release any documents about the investigation file. Finally, The Courier-Journal prompted to sue for access.

Lamont Washington, the LMPD spokesman, declined to respond on Sunday. He also stated that ‘the investigation file is yet to be released by the department. The internal review of the Taylor case is going on, and hence it becomes inappropriate to respond or comment.’ Fischer’s spokespeople did not respond immediately to a request sent through email asking for comment. Daniel Cameron, Kentucky Attorney General, also declined to offer the evidence about his investigation. On Wednesday, he outlined findings by his office after the announcement by the grand jury. He didn’t release any supporting evidence to the public. But, by the weekend, many other videos became available to the public on social media. One video also showed an unidentified officer walking towards the door of Taylor’s apartment, and he asked, ‘Is anybody here dead?”

There was one more post on Facebook, and it was from an account named ‘Julia Roberts.’ the account posted a video that contained clips caught by body cameras and was published by Kendrick Wilson. On Sunday, Wilson responded to reporters that, ‘The footage was obtained from an attorney for Breonna Taylor’s family named Sam Aguiar. Sam was the one who helped Taylor’s family to negotiate $12 million settlement with the city.’ He requested Aguiar to offer more of the records he collected under seal even though the settlement’s requirement that attorneys must destroy the evidence. Wilson now has another pending harassment lawsuit filed in federal court, and it is against Hankison. Sam Aguiar is the attorney for that case, and he will take Wilson’s counsel without asking fee.

The video clip posted by Wilson shows an officer whom he claims not Hankison says ‘My rounds directly went through Taylor’s window.’Another video where an officer was heard stating that, ‘the Black female is shot inside and even the shooter is.’ It indicates that they knew Taylor was severely wounded before even Walker came out of the apartment, and he was arrested. Wilson also responded to viewers saying, ‘There is several more from the place it came from.’ But on Sunday, in the rambling interview, he ultimately refused to offer more evidence, and he accused officers of LMPD of collusion. Wilson said, “I will not spend time trying to prove something” He was asked evidence for all his wide-ranging claims. He added, “I will spend more time on exposing corruption.”

In the end, Wilson walked away after accusing reporters of corruption. Later, In June, Aguiar confirmed about hiring Wilson has investigator, and he hired him for working on Taylor’s case. Wilson was hired on a contract basis, and Aguiar paid Wilson roughly $18,500 for Taylor’s case. Aguiar said, “Wilson posted a video, and that is the only video he had access to.”But Wilson on Sunday responded to a reporter, “I know what a PIU or Public Integrity Unit file is. For possible charges, the investigative findings have now turned to Cameron.”

A news outlet reviewed the body camera footage, and VICE’s report states, ‘No officer present on March 13 raid is paired or separated with an escort, and they followed LMPD policy.”

VICE reports that ‘Detective Michael Campbell was helping the neighbors at the raid. Cosgrove remained on-scene carrying a rifle as per the news outlet reports.’ The conduct of these two officers is also noted in an investigative report that is obtained by VICE. Lt. Dale Massey, a SWAT commander, later responded to the investigators that, “Officer Hankison was little too up in the mix and he wants to be separated as per his requests,’ based on a report by VICE.