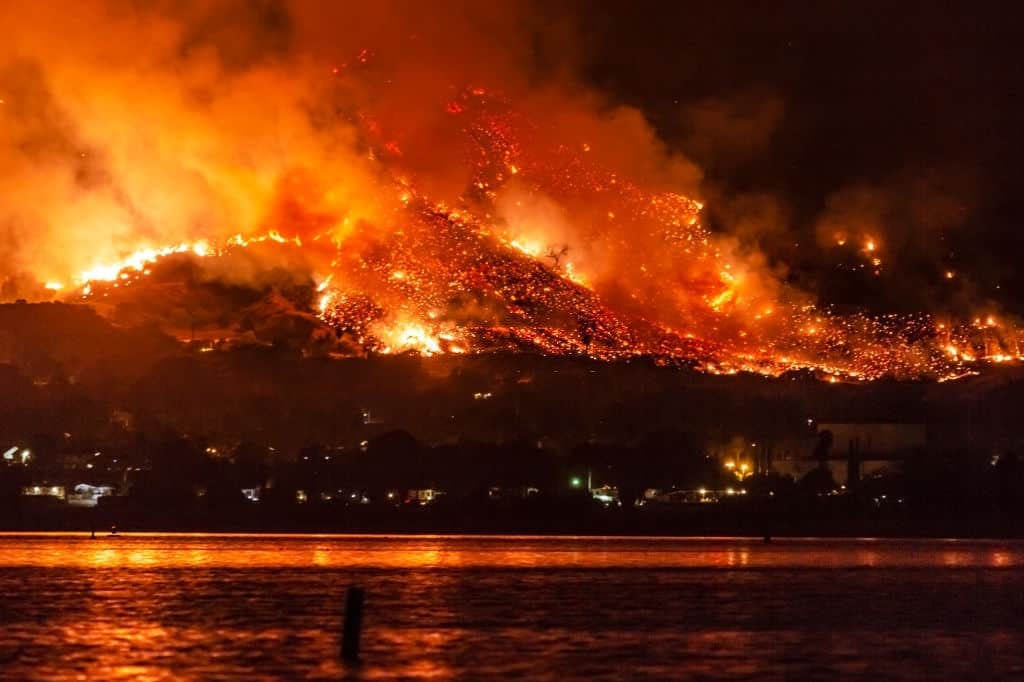 On Tuesday Gov. Gavin Newsom declared an emergency Tuesday over wildfires burning throughout California amid excessive heat while the state’s power grid operator thanked customers for conserving energy in order to avoid rolling blackouts. And the California Independent System Operator had warned the public that many homes and businesses might be affected unless conservation measures worked but it lifted an emergency declaration shortly before 8 p.m., tweeting: “We did it!”

On Monday Conservation measures also helped avoid sweeping outages but the heatwave blanketing much of the state with triple-digit temperatures was expected to continue into Wednesday before a few days of slightly cooler weather set in, followed by rising temperatures again for the weekend. “We’re doing everything in our power to understand the root causes of this,” said Newsom, who on Monday ordered an investigation into outages that occurred on Friday and Saturday.

When this wildfire occurred lightning strikes also set dozens of fires and thousands of people were under evacuation orders not far from the San Francisco Bay Area, near Salinas in Monterey County, around Oroville Dam north of Sacramento, in remote Mendocino County and near the Nevada state line north of Lake Tahoe. Newsom said, “We are deploying every resource available to keep communities safe as California battles fires across the state during these extreme conditions.”

And on Friday California ISO issued the first rolling blackouts in nearly 20 years resulting in the state’s three biggest utilities Pacific Gas & Electric, Southern California Edison and San Diego Gas & Electric turning off power to more than 410,000 homes and businesses for about an hour at a time until the emergency declaration ended 3 1/2 hours later.

Firefighters battled flames running through rugged canyons. The fight was compounded by sweltering temperatures. In addition, a power outage unrelated to the California ISO emergency left some 2,000 Pacific Gas & Electric customers in the dark late Tuesday night. The days-long heatwave also has stressed the electrical system. Operators of the state’s power grid twice ordered rolling outages last week but avoided them this week, saying customers had heeded pleas to reduce their electrical demand.

“We’re doing everything in our power to understand the root causes of this,” said Newsom, who on Monday ordered an investigation into outages that occurred on Friday and Saturday. The heat was expected to continue through Wednesday, bringing more triple-digit temperatures over many areas before a few days of slightly cooler weather set in. However, temperatures could begin rising again over the weekend and into next week, the National Weather Service warned.

“If you get COVID and you’re being exposed to a lot of particulate matter from the fires, that’s going to certainly make COVID worse,” Swartzberg told the East Bay Times. And he also mentioned that the fires also could increase the spread of COVID-19 because they are bringing together so many firefighters from around the state, he said. “It’s a perfect recipe for what we don’t want to do in a pandemic,” Swartzberg said.