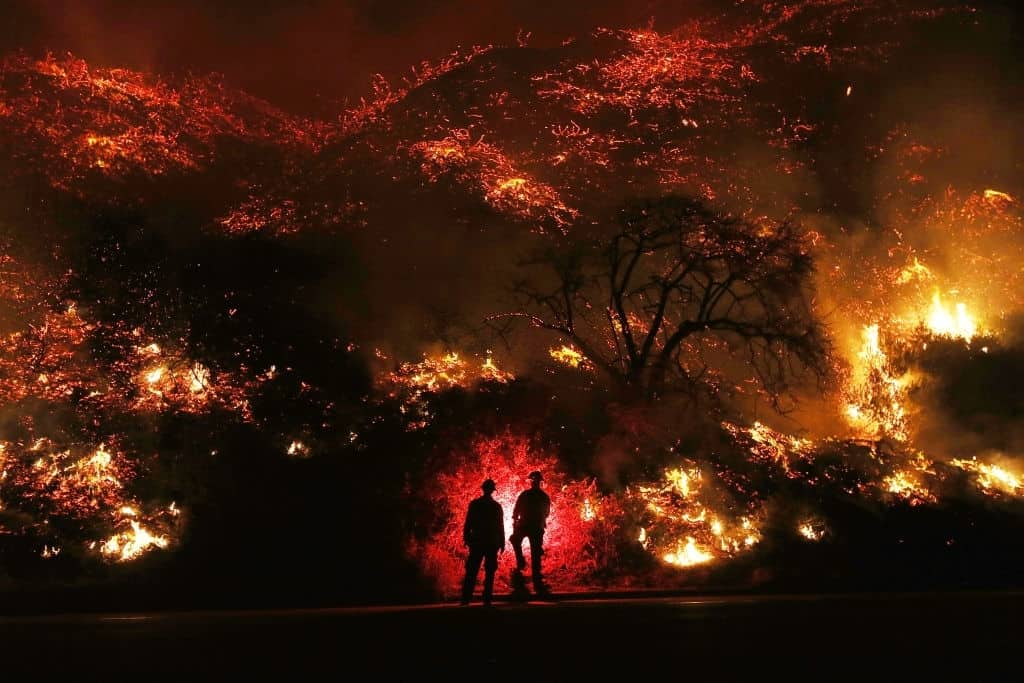 Massive wildfires in California have destroyed more than 2 million acres this year. Parched conditions coupled with intense heat and high winds have triggered such wildfires, and this has even had an impact on the electrical grid on Monday. The effect of the wildfire was so huge that most parts of California suffered from the electrical grid problems on Monday. As many as 8 national forests were closed by the Forest Service.

Talking about the situation, a senior official from the USDA Forest Service Pacific Southwest Region said that the fires display extreme behavior. It has become difficult to control them due to the weather conditions. They also said that they do not have enough resources to fight and contain every fire. The officials also warned that new fire starts are likely, and the future looks grim considering the weather conditions in the region. Cal Fire said that more than 12000 lightning strikes have struck in the past three weeks, which has triggered nearly two dozen major fires in the region. The wildfires have destroyed tens of thousands of acres and even burnt homes in the region. Many residents had to flee to safe areas due to the fire.

Cal Fire spokeswoman Lynne Tolmachoff said that the months during September and October are the worst with regards to fire accidents, and it is historically bad for the forest region as it is very hot. The trees are very dry in this season. Apart from that, the high winds during that season also contribute to many such wildfire incidents. This has also caused power outages across many regions, and as many as 60000 homes and businesses in the region did not get power supply on Monday.  The situation was likely to continue till Tuesday due to increasing fire incidents in the forests, and electrical grids were damaged in some of the places.

In the southern region of California, a gender reveals party is said to be the reason for this wildfire as a pyrotechnic device used at the event sparked a fire, and it damaged thousands of acres of forests. The El Dorado fire near Yucaipa started on Saturday, and the device used to reveal the gender of the expected baby is said to be the culprit behind this incident. The device releases blue or pink smoke to announce the gender of the expected baby, and many people host such gender reveal parties. The incident has destroyed more than 7000 acres of forests, and several small communities were evacuated due to the fire threat. Temperatures in the fire zone reached as high as 90, and Los Angeles saw as high as 111 in the recent week. The Woodland Hills neighborhood of the San Fernando Valley saw a record high temperature of 121 degrees in the past week.

Cal Fire says that they have always reminded the public about fire safety in such regions, and they say that dry conditions and critical fire weather can lead to such wildfires, and it does not take much to start one. They also said in a press release that people responsible for starting such fires due to illegal activity or negligence could be charged with criminal cases. They may also be held financially accountable for the losses due to the fire.Cal Fire Capt.  Bennet Milloy said that the family that used the pyrotechnic device tried to extinguish the fire themselves and called 911. He added that they were cooperating with the authorities and also remained on the scene until the firefighters arrived. He also added that it was a small family gathering and not a party. The officer also said that no arrests had been made so far, and the district attorney will decide on what charges need to be filed in this case.

He added that the charges will depend on the damage done to property or life in such incidents. As flames blazed through Northern California, helicopters were pressed into service to evacuate as many as 200 people to safe locations. The Sunday wildfire came from the Creek Fire through the Sierra National Forest since Friday. Even though firefighters managed to save the small town of Shaver’s, about 30 homes in Big Creek were destroyed as the blaze surrounded Mammoth Pool Campground. According to official reports, more than 70000 acres have been burned, and the fire was listed as 0% contained that shows the intensity of wildfires in this region. Most officials said that they did not have enough resources to handle such wildfires, and they also claimed that it was not possible to contain every fire.

Residents of the area said that they could hardly see what’s in front of them, and the sky turned red like Mars. National Guard leader Gen Daniel Hokanson tweeted photos of the rescue operation that saved nearly 200 people from the wildfires. As part of the safety guidelines, Gov Gavin Newsom urged the residents of the State to keep their thermostats at 78 degrees or higher. Apart from that, he also appealed to the use lights sparingly along with other appliances to reduce the heat. The officials said that large scale power outages were avoided due to the conservation efforts, and more efforts are needed shortly to gain control over the situation. A statewide emergency has been declared, and Newsom even secured a Presidential Major Disaster Declaration to boost the emergency response actions of the State.

He also thanked the firefighters and first responders who have worked hard to battle the August Lighting Siege Fires in this region. He also thanked everyone who supported the rescue operations and specially thanked the frontline firefighters for their efforts. Such incidents have destroyed large areas in a matter of a few days and weeks in the recent past. The government seems to be in denial mode and does not take such incidents seriously until loss of life and property is in large numbers. However, a long term solution needs to be provided to avoid such loss to the forests due to wildfires.