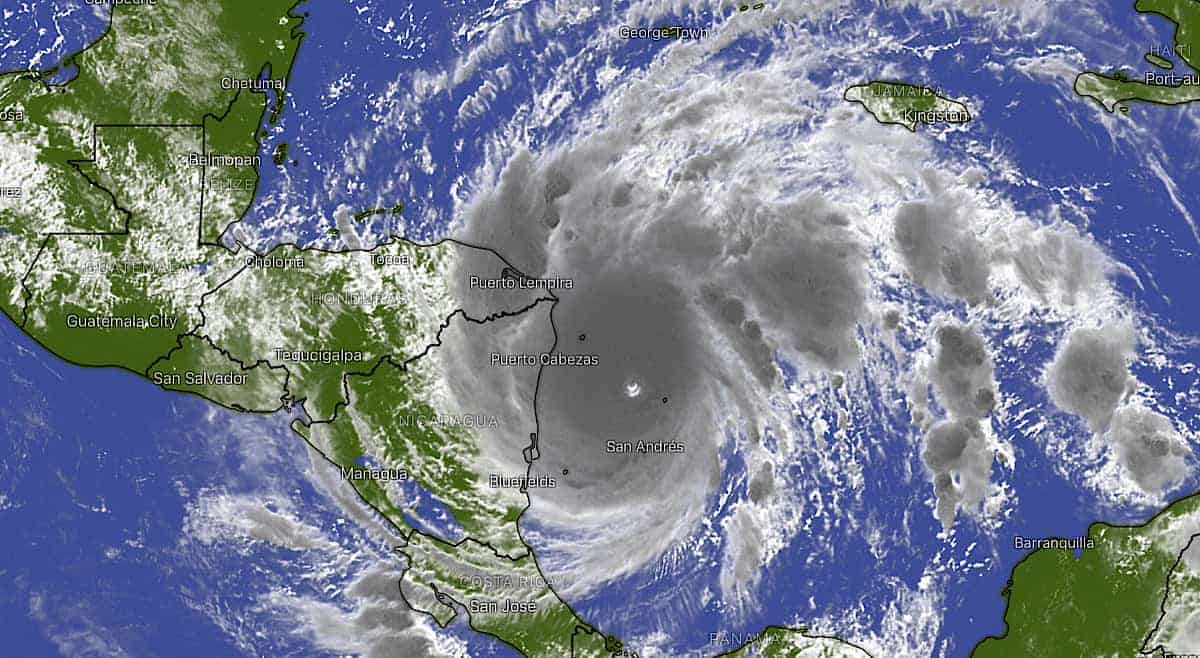 The category 5 storm of the 2020 season, Iota, is nearing its landfall in Central America. This was the same region that was hit by hurricane Eta a few weeks back.

Iota is expected to be very dangerous, and forecasts indicate that it can bring catastrophic winds and torrential rains to several parts of Central America, according to the National Hurricane center.

The Hurricane has intensified over the Western Caribbean region, and the maximum sustained winds were measured at 155 mph, according to the Hurricane Center. As of now, the Hurricane is moving at speed in the westward direction at 9:00 mph. This is the first category 5 hurricane of the season, and forecasts indicate that it could be the strongest Hurricane that was ever recorded so late in the calendar year

According to the Hurricane Center, the catastrophic situation unfolding in the Northeastern region of Nicaragua can bring an extreme storm surge of 15 to 20 feet along with 30 inches of rainfall. The worst part of the Hurricane is that this is making landfall in the same place as that of the category 4 hurricane Eta. The previous Hurricane had made landfall in this region about 2 weeks back, and rescue operations are still in force to recover from the effect of the previous Hurricane.

Evacuations are still being conducted from many low lying areas in Honduras and Nicaragua. Hurricane Iota is likely to make landfall in this region on Sunday night. The entire region of Honduras is placed on high alert compulsory evacuations have started in many vulnerable areas. Close to 60000 people were evacuated and placed in many Shelters in the affected region.

According to Nicaragua officials, many children and elderly people from the low lying areas have been evacuated and put in safe places. Heavy wind and rain were seen as early as Sunday in coastal areas of Nicaragua. Many people started visiting hardware stores and other market areas in search of plastic sheeting and other materials to protect their homes during the Hurricane. During the last two weeks, the region was affected by a Category 4 Hurricane that killed at least 120 people. The region had seen mudslides and flash floods that caused severe damage to life and property.

The Hurricane, which is expected to make landfall in the same region, can bring about 8 to 16 inches of rain in the Northern regions of Nicaragua, Honduras, and other areas. Some regions may also experience flooding due to heavy rains, according to a forecast given by the authorities.

The official end of the Hurricane season is at the end of this month, and Iota is expected to be the last Hurricane of this season. Due to climate change, the hurricanes are getting stronger and bringing more destructive Storms to the coastal regions. Rescue and relief operations are in full swing, and authorities are working hard to restore normalcy in the region.

Several hurricanes have hit the coastal regions of America in recent months and caused heavy damage to life and property. Environmentalists have given warnings that such hurricanes will become more common in the near future if proper measures are not taken to control climate change.

Most people are worried about heavy winds that can cause severe damage to life and property during Hurricane season. It becomes very difficult to control the damage when back to back hurricanes hit the same region. Several back to back hurricanes have hit coastal cities in recent months. Even the authorities do not have enough resources to handle such kinds of hurricanes, and they are struggling hard to evacuate people from vulnerable areas.

Many people who live in low-lying coastal regions are often affected by such hurricanes. They have very limited resources to protect their homes in the situation, and they often depend on rescue and relief operations conducted by the authorities. In most cases, they will be moved to shelter homes during hurricanes, and they will have to get back and rebuild their homes after the catastrophic Hurricane. This can create a lot of problems for vulnerable people, and they may not get suitable compensation in many cases. The authorities should also look into providing proper support to such people affected by natural calamities.