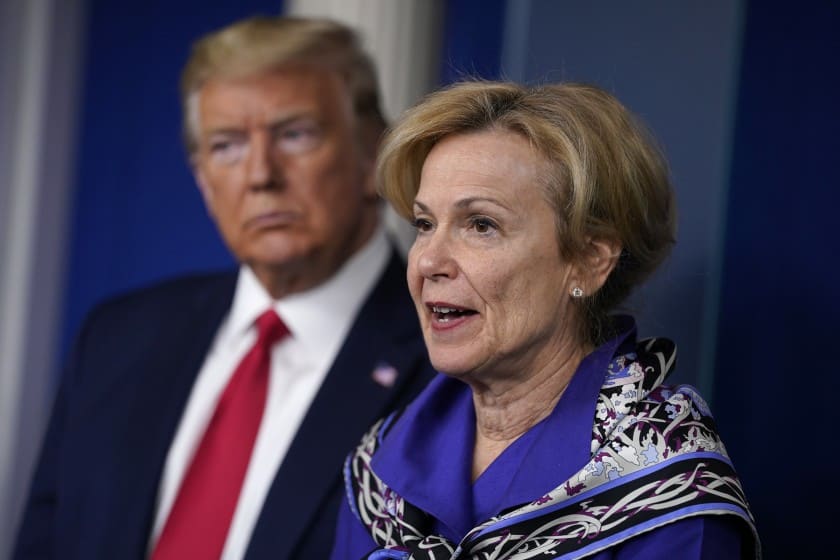 Dr. Deborah Birx and Dr. Anthony Fauci among other physicians speak up against Trump in an exclusive series of interviews named “Covid War: The Pandemic Doctors Speak Out”, aired by CNN. They recount their own struggles during the pandemic and how new strains of the virus along with unsound regulations are responsible for the increase in case numbers in the U.S.

In a shocking snippet from the documentary broadcasted by CNN on Sunday, Dr. Deborah Birx, former Global AIDS coordinator under Mr.Trump and one of the most visible figures in the nation’s battle against the virus, confessed that many deaths in the U.S could have been easily avoided. Pandemic officials under former President Donald Trump revealed that the government’s approach towards the pandemic was corrupt with severe flaws, callous management and deceptions.

Data from the John Hopkins University Coronavirus Tracker suggests that an estimate of  550,000 individuals have suffered deaths from coronavirus, as of today. Dr. Birx told Dr. Sanjay Gupta, the chief medical reporter for CNN, that while she believes that many fatalities in the first wave were unpreventable, the deaths in the later waves could have plummeted only if the administration implemented proper shutdown and social distancing measures.

Furthermore, it has been revealed that Trump’s government had lied to the public about the accessibility of testing. Contrary to the claims made by senior officials, they simply lacked the resources for conducting tests in large quantities. Additionally, tests would have increased the case numbers, causing President Trump’s image to become diluted.

Dr. Robert Redfield, who formerly served as the director for the Centers for Disease Control and Prevention, told Dr. Gupta that Alex M. Azar allegedly coerced Dr. Redfield into redrafting scientific reports. However, Mr. Azar, who is the former United States secretary of Health and Human Services, dismissed this accusation.

In December 2020, Birx had implied that she would retire from her designation soon after Mr. Biden assumes office. This action was widely viewed as a response to her contemptible image among democrats, who perceived her as being a facilitator of Trump’s outlandish and bizarre strategy for Coronavirus. Birx has repeatedly faced condemnation for favoring Mr. Trump and has been called out for being afraid to challenge his unscientific claims.

While recalling a “very uncomfortable” conversation with Trump following the CNN report in August 2020, Birx mentioned that everybody in the White House was particularly disappointed with that interview. After that incident, she traveled across the country to encourage state and local leaders to implement mask-wearing and proper measures to restrict social gatherings. The Trump administration reportedly restrained her from disclosing such information to the American public.

On being asked whether she was being censored, Birx asserted that the Trump administration was disregarding her science-based assistance and that “someone was blocking her from doing it [appearing on national media].”

Apart from Dr. Birx, many other public health officials who served under Mr. Donald Trump are coming forward since vacating their positions. They often encountered conflict of interests with Trump regarding the administration’s Covid-19 response.

Since the disband of Trump’s administration, case numbers have significantly plummeted owing to Biden assuming office in late January 2020, from the record height of 200,000 cases per day to the present average of 60,000 per day. This success can be attributed to the fast pace of vaccine manufacturing and the implementation of aggressive measures under Mr. Biden’s assistance.