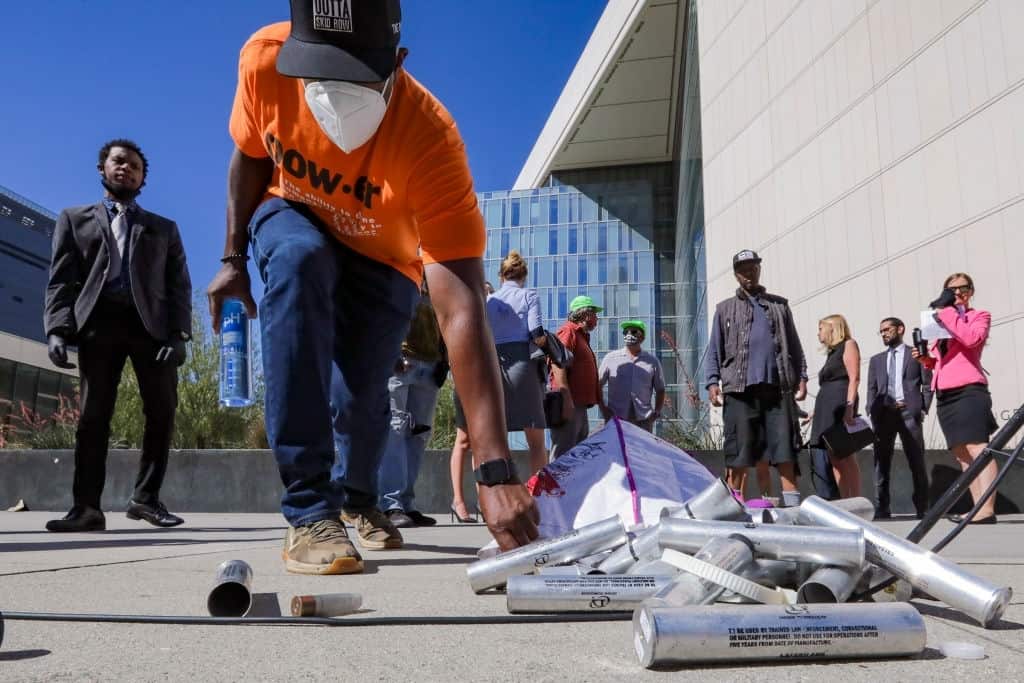 Doctors groups have now identified as many as 115 confirmed cases of head injuries due to the use of less-lethal projectiles at protests in recent months. The study aims to find out how safe these so-called less-lethal projectiles are when it comes to managing crowds during protests. As the entire nation is angry with the recent incidents of police brutality, many people are calling in for some reforms with regard to the usage of such less-lethal weapons to control crowds.

Many Physicians who work for Human Rights say that this figure may not reflect the complete reality as it has taken into account only those cases that were in the public domain. They believe that the actual numbers are more than what the doctors have identified, and many reports without adequate evidence may not be recorded in the study. The organization that worked on the report identified the hot spots that were affected the most during the recent protests from May 26 to July 27. The regions of Austin, Texas, Portland, Oregon, and Los Angeles were the major hotspots that were considered during the study. One of the victims of Los Angeles protests, Abigail Rodas, was shot in the jaw with a rubber bullet on May 30. She has filed a lawsuit against the city, and the Police chief, along with other members of the Black Lives Matter protests and Los Angeles Community Action Network. Other people were also similarly struck with projectiles.

Rodas was hit with a  projectile as she was leaving a protest, and she lost consciousness after the projectile struck her in the face. Doctors used a steel plate to repair her jawbone, and she could not talk for about 10 days. She had to survive on a liquid diet for a week, and nearly three weeks after the incident, she has screws in the gums along with rubber bands to help the bones rejoin. This has immobilized her jaw, and the nature of the injury was very severe, according to doctors. However, the police officials have denied the allegations in their court filing and said that the use of force in such a situation was reasonable and necessary for self-defense. This is not the first time that police officials are under scrutiny for using such weapons, and they have almost taken it for granted to use such so-called less-lethal weapons to control crowds during protests. However, recent studies have shown that these are not less lethal, and they have the potential to implicate permanent damage and even kill someone if they are hit in a delicate spot.

Dr. Rohini Haar, who is the lead investigator for the analysis and also an emergency physician in Oakland, California, the entire thing seems systematic, and there is a need to reassess the use of such weapons during protests. In common terms, they are often called rubber bullets, but the law enforcement identifies them as kinetic impact projectiles. Hard sponge or foam is used in such projectiles which have a plastic tip. Apart from that, sting balls are also widely used that are grenades that spray hard rubber pellets. According to the reports coming from many places, even tear gas canisters were fired at people during the protests by the law enforcement authorities. Doctors do not agree with the term less-lethal weapons as they believe that weapons are just as lethal as law enforcement wants them to be. They acknowledge that even these so-called less-lethal weapons can inflict serious damage on individuals.

According to a study published in 2017 by Haar, it was found that nearly 3% of people hit by projectiles died, and about 15% were injured permanently due to such projectiles. They considered worldwide data while making the report. The doctors’ groups are now recommending to ban such weapons that release scattershot or multiple projectiles as they can hit people indiscriminately in the nearby surroundings. They also said that metal projectiles are very dangerous, and they can cause permanent injuries in most cases. Police commonly use such grenades that can throw multiple projectiles from a single canister. When it comes to using such weapons, the authorities must be given proper training, and they should follow the strict guidelines of the department while using them on crowds.

The study particularly highlighted the point that police often break their own guidelines, and there is no standard when it comes to the usage of less-lethal weapons. Apart from that, there is no comprehensive data about their usage and how it has impacted the crowds in different ways. In Los Angeles, many people who were having peaceful protests were also shot with such less-lethal projectiles. In that region, the departments do not allow such weapons to be used on nonviolent people. In some instances, police have even aimed them at the faces of the protesters or fired them at close range, according to several witnesses. Doctors believe that effective communication with protesters is needed in the first place before using such weapons.

They believe that there is no place for such weapons in crowd control, and it can indiscriminately hurt people. They also suggest that police can engage with the leaders organizing the protests and arrest only those who are indulging in violent acts instead of dispersing the entire crowd. Doctors also feel that using such projectiles on everyone in the crowd has an impact on their mindset, and the cumulative effect can last for a long duration. When they feel that they are being attacked, some people who are not violent by nature also tend to indulge in violent acts in such situations. For this reason, police should always be careful about using such weapons on the public. Following many such complaints, as many as seven major US cities have issued limits for using such projectiles during protests. However, police officials in many other states have objected to such proposals, and they feel that it is essential for maintaining law and order during protests.