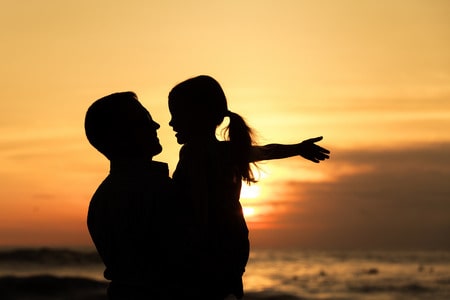 Eight months after receiving a piece of his liver, his 12-year-old daughter is doing well. She received the transplant after almost dying from an internal hemorrhage.

Rhett described the situation as “very close.” At the time, Cecilia, his 11-year-old daughter, had spent years on the transplant waiting list and had twice been summoned to be a backup recipient, only to be sent home in disappointment.

They didn’t have to search very far. Rhett’s liver was a perfect match, according to tests and scans. Both were scheduled for surgery a few weeks later.

Rhett described it as a blessing. That’s the only way to put it.

Cecilia has suffered from biliary atresia since birth. When bile ducts in the liver do not develop correctly, the organ cannot function properly. According to John Seal, one of the surgeons on the family’s transplant team at Ochsner Hospital for Children in New Orleans, it’s one of the most prevalent reasons children in the United States require liver transplants.

Having a biological parent as a living donor boosts immunity and reduces the likelihood of organ rejection. However, some children awaiting transplants are in foster care or are in situations where a biological parent is unable or unwilling to give.

Seal explained that there is currently a trend among pediatric surgeons and organizations around the country to encourage more anonymous live donors.

He claims that organs obtained from living donors are of higher quality than those harvested from deceased donors. Furthermore, because the liver regenerates fast, children and tiny people usually only require a portion of a healthy donor’s liver. According to Seal, both patients may anticipate their livers to recover to normal size within a few months to a year.

He believes that no child should die while waiting for a liver. The greatest danger is the period-spent waiting for an organ, which is becoming more protracted across the country.

According to the United Network for Organ Sharing, the charity that oversees the nation’s procurement and transplant procedure, 491 of the 8,906 liver transplants done in the United States last year were made possible by living donors.

More than 500 liver transplants were done on youngsters last year, but just 66 were from living donors. According to UNOS, just 22 of those donors were the child’s biological parents.

Seal stated that they still do not have enough quality donors to care for all of the children on the waiting list.

According to UNOS, more than 300 children and 11,500 adults are still on the waiting list for a liver transplant in the United States.

Rhett says he’s doing fantastic eight months later, is back at work, and is enjoying his favorite activities, hunting, and fishing. He expressed his desire to see her achieve her full potential now that nothing is holding her back.

He and Angelle laughed and grinned as they watched Cecilia, now 12, play tag on hoverboards with her younger sister, Lydia. Cecilia demonstrated her jumps and twirls while the girls performed some dancing routines.

This level of activity would have exhausted and strained her body before the transplant, producing pain, discomfort, or sickness at times.

Cecilia stated that she has a lot more energy and doesn’t feel as awful as she used to. She stated that it had been five months since her previous visit to the hospital.

She simply feels better in general, she explained. Her parents see that she is improving as well.

Angelle explained that she does not wake them up in the middle of the night to inform them she is nauseated or that she is not feeling well. She’s becoming more like a typical child.

Cecilia recognizes her good fortune as a result of her father’s love and kindness.

She considers herself fortunate and appreciative that he was able to do this for her. Her father is amazing. He’s been her hero for as long as she can remember.