Hurricane Sally has caused severe damage in Florida and Alabama in the last few days. It has left more than 320000 homes and businesses without power, and the death toll has also climbed since the last two days. Many areas of Florida and Alabama saw more than 2 feet of rain, and the estimated damage to property is in the range of $29 million. 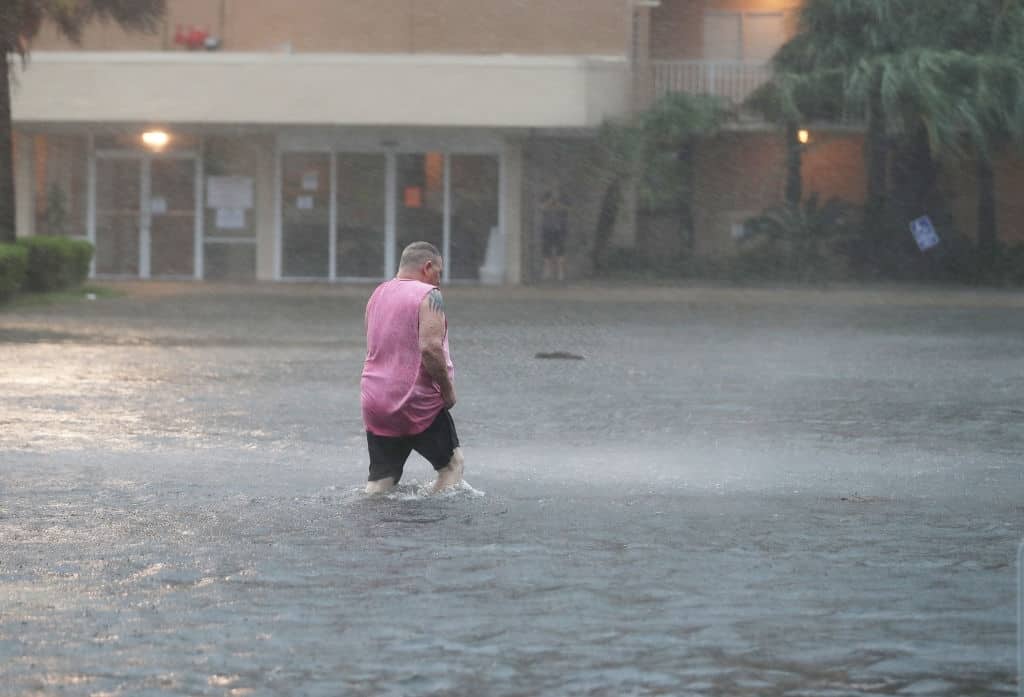 According to the National Weather Service, rescuers use high water vehicles to reach the affected areas where people are trapped due to floods. They also expect more flooding in the next few days as many rivers and streams are overflowing due to heavy rains. Coastal flood warnings were given in areas of Virginia and Maryland around the Chesapeake Bay. The Florida-Alabama border region saw heavy torrential rains, and most of the areas looked like rivers with battered buildings and boats. As much as 30 inches of rain fell in Orange Beach and some isolated areas of Florida as per the Weather Service data.

Rescue operations are in full force as Governor Ron DeSantis said that the authorities are working on sending gasoline, food, drinking water, ambulance crews and generators to the affected areas in the northwest part of the state. Things look far better than what they had anticipated, and they had expected it to be worse. In the Pensacola region, a boater who had gone missing on the day Hurricane Sally struck is still not traced, and the US Coast Guard has ended its search for the boater. The boater Brandon William Nicholson aged 27, was seen on Wednesday when he moved into the sea to recover his pontoon boat swept by the storm. He chased the runaway vessel in a 12 foot Jon boat. The US coast guards conducted searches along the shoreline, and six overflight searches for the missing boater. After they could not find any clues, they abandoned the search operation on Thursday.

Alabama also saw some huge damage and one person who was involved in storm cleanup efforts died in Foley. Another death occurred in Baldwin County due to drowning. National Weather Services in Virginia said that the Cyclone Sally caused heavy rains that resulted in flooding along the Chickahominy River. Apart from that, several other rivers, including Hampton and Norfolk, were also experiencing flooding on Friday. Many Pensacola residents have seen such storms, and they know the extent of damage it can do to the property in this region. They have seen at least four major floods in the Forest creek region since 2012. Even a mild storm has the potential to cause several feet of standing water. Even this time, the region was flooded with at least 3 feet of water, and most residents lost a lot of valuables and property in this storm.

The news for the next few days is not positive by any means as the tropical depression 22 has formed in the western Gulf of Mexico, which is expected to become a Category 1 hurricane. It is expected to reach the coast of Mexico or Texas in the next week, and the depression can become a tropical storm by Friday. However, the path of the storm is not yet known, and it has a slow forward momentum as of now, according to the National Hurricane Center. One family living on the Gulf shores posted a video on social media that shows an alligator swimming outside their home in the street. It is a big 12-foot alligator, and they were afraid to move out of home as there can be many more in the area.

Power cuts were rampant, and more than 320000 customers did not have access to power in Alabama and Florida. Gulf Power said that they expected to restore about 95% of power in Escambia and Santa Rosa counties in Florida by Tuesday. These two counties were the worst hit in the last few days. Officials from Escambia and Pensacola have been trying to make initial assessments of damages to public buildings and roads. According to their estimates, more than $21 million damage is seen to public infrastructure in Escambia county, and Pensacola is expected to see at least $7.9 million in damage. An old couple in Florida had a tough time during the storm as their house was flooded, and they had to be rescued to a safe place.

They had written a note asking for help on the front door, but the fire trucks and rescue vehicles did not notice them even as they moved around her house in Cantonment, Florida. The couple then resorted to using an ear-splitting whistle that is used as an emergency signal that got the attention of the firefighters. They were rescued along with their two dogs and moved to a safe location. However, their problems do not end with this as they have to find temporary housing and file insurance claims for their cars. City officials have said that the region has seen severe damage due to the storm and their first priority is to move people to safe areas. They are now working towards restoring power to affected areas and providing them with food and drinking water. The trees and power lines are down in most counties, and this has also led to several collisions as traffic lights are not working in the affected areas.

Once the rescue operations are completed in the next few days, the authorities are expected to work towards providing relief measures by restoring power and repairing the damaged roads. The insurance companies will have to deal with a lot of claims as most public properties are damaged due to the storm. Many people are left homeless, and they have to build everything from scratch after the storm ends in the next couple of days. The authorities are trying their best to help the people and have given early warnings about the intensity of the storm. This has saved many lives, and the death toll is considerably less, as most people in vulnerable areas were evacuated to safe locations before the storm hit the shores.