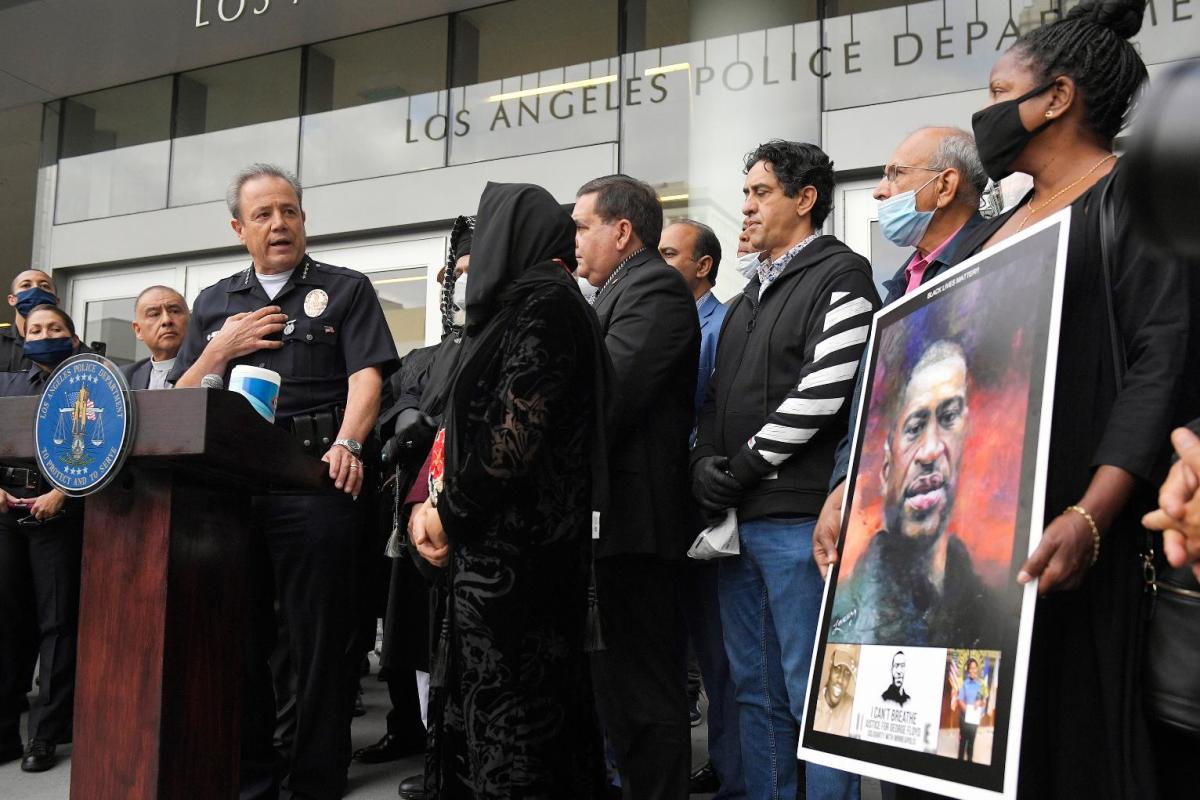 Investigations are underway in a recent case of a Valentine’s Day where the Valentines’ theme displayed and shared George Floyd’s image.

Los Angeles Police Department is looking into the matter. The theme was regarded as offensive. George Floyd was a Black man who was killed last year by a Minneapolis police officer.

The description of the Valentine-themed post that is into question was briefed by one of the LADP officers to CNN.

He said that the post contained George Floyd’s picture with the phrase “You take my Breath Away.” It is reported that Floyd died last year in May by repeatedly saying that he cannot breathe to the police officer.

The Minneapolis police officer was reported knelt on the neck of the victim for about 8 minutes. The phrase with George Floyd image is simply offensive given such circumstances of Floyd’s death.

LAPD tweeted and said through a series of tweets that LAPD has zero-tolerance for such offensive matters and behaviours and therefore has begun an internal investigation about the post.

LAPD mentioned an image passed through the Department on their official account and that the image was in the workplace. They said that they were alarmed by the allegations that such an image is circulated at the workplace.

Rumours are also circulating, saying that the post containing Floyd’s image is authored by one of LAPD department employees.

A personnel complaint is filed, and allegations are being pursued. Everyone in the department is being interrogated, including the officer who brought the matter into the light in the first place.

However, the department clarified that they hadn’t identified any actual postings at the place and that it is also unlikely that the post is originally created by one of the department’s employees.

They deny that LAPD is the source of origin. But it is admitted that the origin of the offensive post is still not known.

Captain Stacy Spell told that they had not identified the actual source and the origin of that post. They are unsure where the post appeared first.

It could be a social media platform like Facebook or Twitter, or it could be on an email, and the possibility of any other form is also there. They said it is also unclear if the original source of the image was outside LAPD.

LAPD internal affairs officers are looking into the matter. As per their statement, an internal investigation is going on and that they are investigating the circumstances surrounding the image and that where the employees have first seen the image. They are trying to find out the people responsible for the post.

District attorney George Gascón stated that the Los Angeles County attorney’s office shall review the case if the integrity of any of the cases is compromised due to biased police work.

Gascón condemns the celebration of an innocent Black man’s death by a police officer and said that it is a shame on humanity.

According to attorney Ben Crump, Floyd’s family was furious and devasted when the news of circulation of such a post reached them. They demanded immediate termination of the person responsible for the offensive post.

Many activists are also reported to gather around LAPD office and pressurized the LAPD to fire the officers who shared and circulated the post.

One of the activists said that Najee Ali said that LAPD officers involved in this shameful matter do not deserve to wear the uniform and should be terminated.

The union representing LAPD officers also condemn the incident saying that the employees who shared and liked the post, including the one who might have created it, should be held accountable.

LAPD employees who have liked celebrated and shared the post surely do not have the judgment skills, and they are not capable of holding a post as LAPD.

The internal investigations are still underway.