During his recent visit to Kenosha, Wisconsin, President Donald Trump backed law enforcement and said that domestic terror was the reason for destruction in the region. The city saw many days of violence after a Kenosha police officer shot a black man, Jacob Blake, seven times in the back. The incident left him paralyzed below the waist, and he fights for his life in the hospital. As elections are coming near, Joe Biden appears to be leading in opinion polls, and Trump is trying hard to catch up in the race. The President is making law and order as the theme for the upcoming elections. 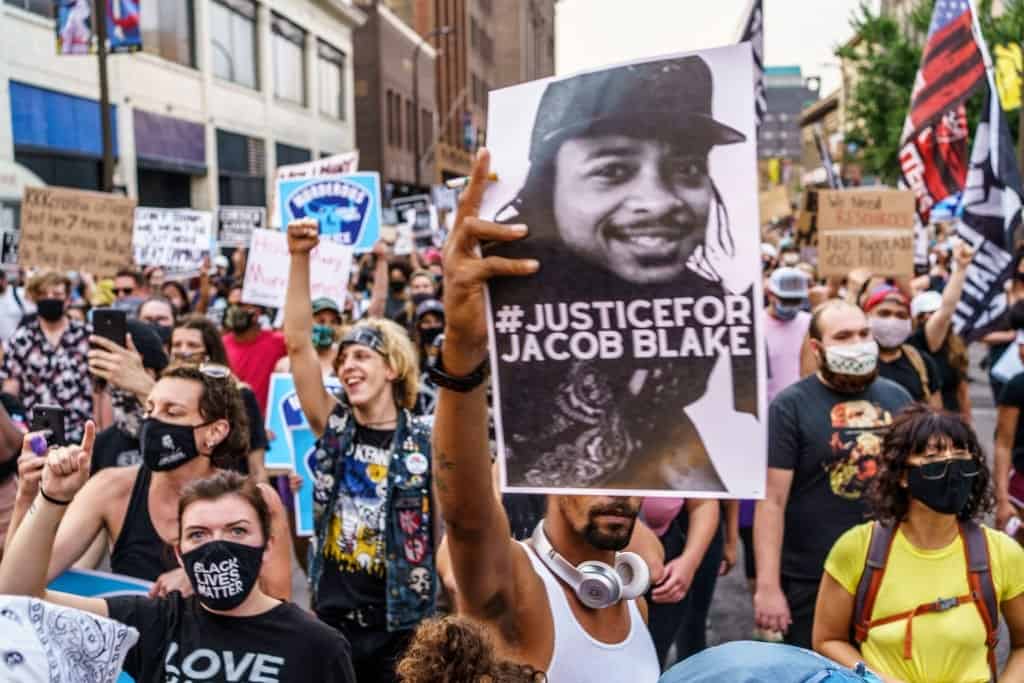 Meanwhile, Biden has accused Trump of inciting racial division in the country by invoking the issue of law and order in every speech. He added that Trump is fanning the flames rather than trying to put it off as many cities continue to burn due to violent protests. On August 23, Jacob Blake was shot by a Kenosha police officer when they were called in for a domestic situation. When Blake was trying to get into his car, the officer shot him seven times in the back. The incident happened right in front of Blake’s children, who were sitting inside the car.

This sparked a lot of outrage, and many protests were held in Kenosha and many other cities across the US. In Kenosha, some protests turned violent, and a 17-year-old boy shot three protestors during the riots. This incident left two of them dead and another injured. The city is slowly coming to terms with the situation as security forces continue to guard the city. After the incident, Trump visited Kenosha to survey the damage done to local property and speak to law enforcement authorities. He visited the areas that were damaged due to violent protests, including a camera shop and burnt out furniture store.

Trump said during his visit that these are not peaceful protests, and it can be called domestic terror. He was speaking at a round table meeting with local business leaders at a high school gym. He was also harsh on the media and said that only negative incidents involving the police get highlighted in the media. He added that police officers are usually under tremendous pressure in such situations, and they may choke in such a situation. The officers may have had a clean record for many years, but when a moment comes when they have to make a split-second decision, they may choke as they will be dead if they make a wrong decision.

He also expressed his sympathy for people who were hurt during clashes with police but clarified that there was no systemic racism in law enforcement. He added that he sent the National Guard to Kenosha to maintain law and order. However, as per sources, they were deployed by the State Governor, and an additional 200 federal officers were sent by the President. Trump also announced that the administration would provide aid of $1 million to the city law enforcement and about $4 million to help local businesses in Kenosha that have been hurt due to riots.

As violence quickly erupts during such situations, some patterns can often be seen, and it is outsiders hijacking the protests. This happened even during the Kenosha protests, and demonstrators have accused that many outsiders joined the protests and incited violence. The Kenosha police arrested about 175 suspects, and more than 100 out of them came from outside the city. During the Kenosha visit, Trump declined to meet the family of Jacob Blake as they wanted their lawyers to be present in the meeting. He said that it was inappropriate to have such a meeting when lawyers were present. However, he added that he was honored to meet the co-pastors of Blake’s mother during the roundtable meeting.

African American co-pastor Sharon Ward said that it was important to have black people at such meetings in order to resolve the problems. Talking to the media, Blake’s father said that he was not interested in playing politics, and his son’s life was more important than having a meeting with the President. He added that he did not want to be part of a photo op.

Trump’s visit received a lot of criticism from many corners due to the timing of his visit. The Democratic Mayor and Governor had asked him to stay away from the city during these conflicts. They were of the opinion that this could trigger further violence and hamper the healing of the city. Trump visited the affected areas and posed in front of the shops that were burnt during the riots. However, he wrongly claimed a person as the owner of a camera shop that was burnt during the riots. The owner Tom Gram who shop was destroyed said that he was requested by White House authorities to pose with Trump during the visit, but he declined it, saying that he did not want to get involved in that circus.

Kamala Harris even met the family members of Blake and asked the authorities to book a case on the police officer who shot Jacob Blake. She condemned the incident and called it a crime to shoot an unarmed person in front of his children. As the election nears, such incidents continue to hog the limelight, and politicians try to make the best out of such incidents to consolidate their vote banks. In this situation, it would be interesting to see what impact such incidents will have on the November presidential elections.