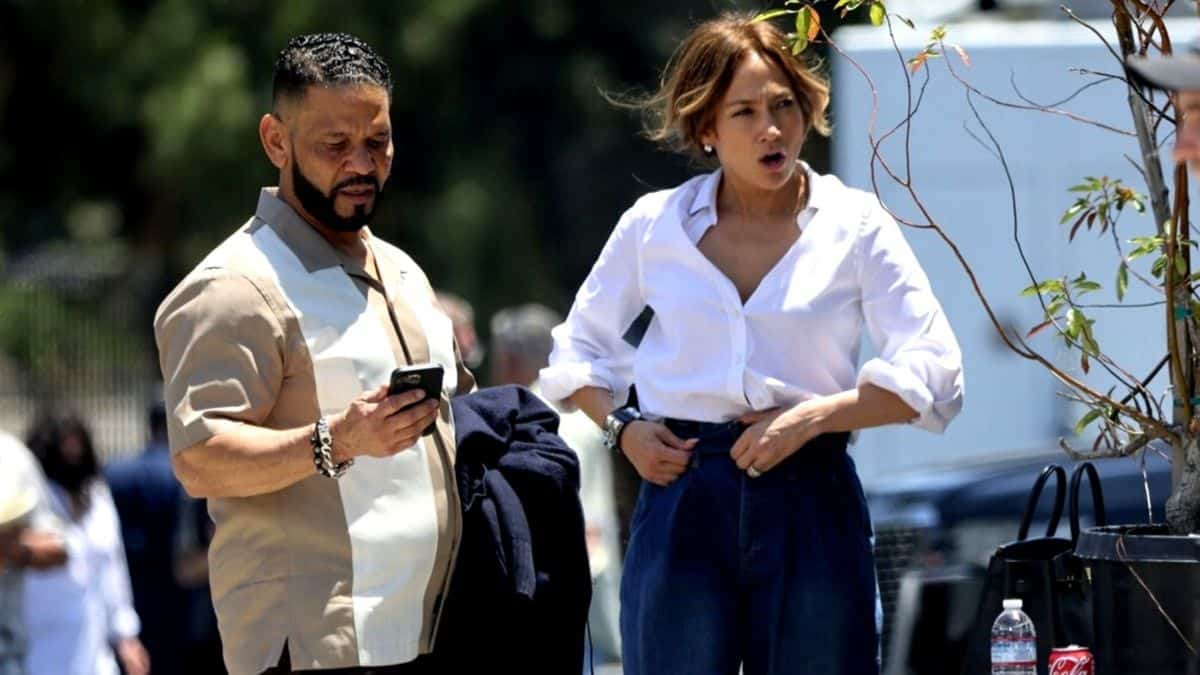 On Father’s Day, J-Lo raved about her fiancé Ben Affleck. And Jennifer Lopez once more demonstrated her love for her partner by paying him a visit on the set of his as-yet-untitled Nike movie in Los Angeles on Tuesday. With a pair of black pants that cinched into her dance-trained frame, she drew attention to her slim waist. Her hair was worn down in large, flowing curls that fell past her chest and gave her outfit a glossy touch.

A fitting white tank top tucked into her pants helped the Get Right singer highlight her toned body. With a silver chain bracelet and a striking manicure, she spruced up the appearance. Ben and Matt continued working on their film while acting casually.

Ben appeared to be in a good mood as he spoke with Matt while holding a large iced coffee. Both of them were dressed in black tops, pants, and stylish sneakers.

A new film about Nike’s success in landing a deal with Michael Jordan in the 1980s stars is written by and is being produced by Ben and Matt. Damon will play Sonny Vaccaro, the real-life man who, in defiance of all the doubters, secured the agreement with Jordan even though more established shoe firms Converse and Adidas were in the running. They originally met as young children growing up in Massachusetts.

During the filming of his upcoming film about Michael Jordan and Nike, Ben Affleck was encouraged by Jennifer Lopez. The megastar, 52, walked by and spent some time holding the filmmaker, 49, by the hand while she was dressed in a long white dress. Emme, Lopez’s 14-year-old daughter from her previous relationship with Marc Anthony, joined them.

The Bronx fashionista combined her eyelet dress with a long beige sweater that she knotted in the front. A scoop neck collar with ruffles that extended around its entire perimeter adorned the dress. With her hair pulled back in a casual updo, Jen sported a warm yet stylish appearance. She wore substantial gold hoops and left long sections of her hair out in front, giving it a lovely framing.

J-Lo added height to her 5 feet 5-inch frame by pairing the feminine outfit with a pair of beige espadrille wedges. She didn’t wear a hat or sunglasses because it was a normal bright day in Southern California and the sun was shining directly into her eyes. She held her daughter’s hand while at one point placing one hand in her sweater’s pocket. Emme sported a long-sleeved black top, a pair of Jordan sneakers, and brown cargo pants.

Ben, Emme’s soon-to-be stepfather, once embraced the adolescent with a warm arm. Affleck, who is both directing and starring in the film, was decked out in a burgundy t-shirt bearing a disturbing portrait of Charles Dickens. The actor’s George Clooney-directed movie, “The Tender Bar,” was mentioned in a sentence on the back of the garment. It was worn by the father of three with a pair of black sneakers and traditional blue trousers.

Matt Damon, a close friend and longtime associate of Affleck, was also present. The Hollywood hottie sported brown cargo pants with a traditional baseball-style t-shirt in grey and black. He was sporting a light-colored pair of well-used sneakers and a black hat with a camouflage brim. He moved around the movie set with a cup of coffee in his hand.