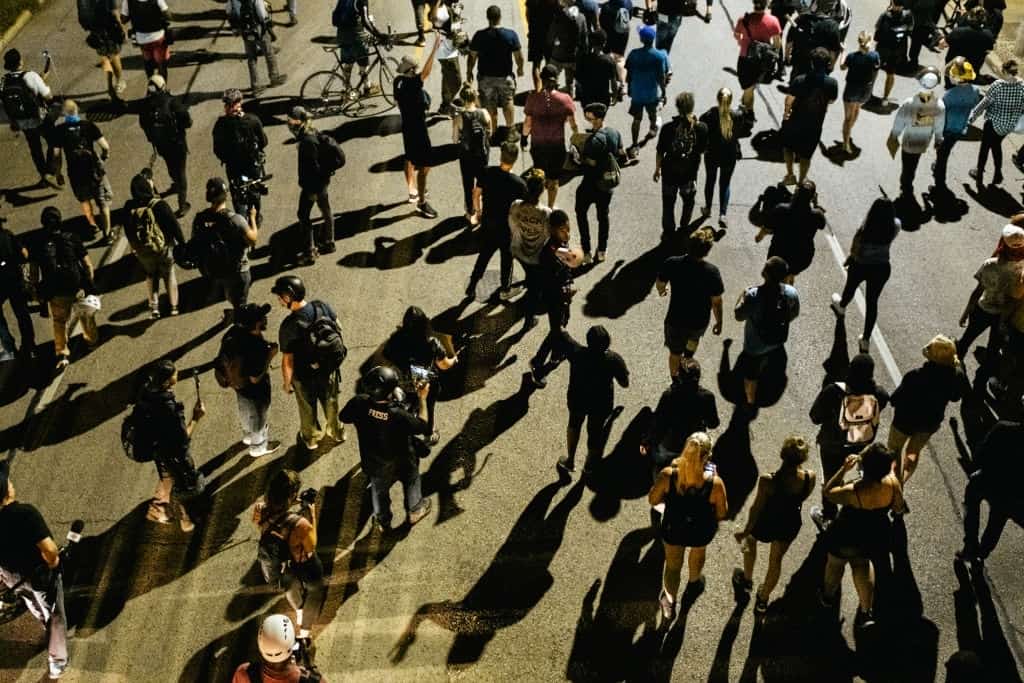 Kenosha is slowly coming to terms with the recent violence that followed the shooting incident of Jacob Blake. On Friday morning, volunteers were seen trying to color the plywood sheets and bring light to the part of the city that still smells smoke from last week’s violence.

Locals born and brought up in this region are disheartened to see the city’s current state. They were seen with placards asking justice for Jacob Blake. They were also excited that some high profile athletes have tweeted about the incident, which can impact the situation in the long run.

On August 23rd, local police got a call for a domestic incident from a woman saying Jacob Blake was not supposed to be on the premises. In what could have been an everyday incident turned ugly with the Kenosha police officer shooting Jacob Blake seven times in the back. Everything was captured on video by a bystander, and this went viral in no time.

What happened next was not unexpected, considering the events that have unfolded in the US in recent months. There were lots of protests in several regions along with Kenosha, and they turned violent. This is nothing new as the country has seen such incidents in the recent past with the Black Lives Matter protests. It is always better to avoid such situations as they can easily spiral out of control in no time.

Several protests rocked the region for the next two days, and the protestors were opposed by some vigilante members of the local community. Things turned worse on Tuesday when a 17-year-old guy, Kyle Rittenhouse, opened fire at the protestors and killed two of them in the incident. Another person was injured in the shooting and admitted to the hospital. The boy was later arrested on several charges.

The incident also caused a lot of tensions across the country as the accused Kyle Rittenhouse was adamant in his behavior and mentioned to reporters that it was his right to protect the properties in Kenosha against protestors. The way in which police handled both the situations also came under discussion as many felt that they were soft on white criminals like Kyle Rittenhouse, who was armed in public. They were unnecessarily harsh on a black person Jacob Blake who was unarmed at the time of the incident. Jacob Blake was getting into his car, which had his children when the police officer opened fire and shot seven times in the back.

The community still worries about such incidents in the future as things can get ugly even though they appear to be calm as of now. Several community members held prayers and spoke with local authorities to restore peace in the city. The Trump administration also sent National Troops to handle the situation.

The situation got widespread support from all corners, and Milwaukee Bucks did not participate in the playoff game calling the Wisconsin Legislature to address issues of police brutality and reforms in criminal justice. Their boycott was also supported by many other teams across the board, and even Milwaukee Brewers took a similar stand on the issue.

The issue was even mentioned at the RNC, and the party spoke in terms of restoring law and order across various cities of America. The Republican party condemned the violence that followed the shooting incident, especially in Democrat-run cities like New York, Portland, Kenosha.

Biden was quick to criticize the police brutality and said that the police officer did not just shoot Jacob Blake, but he shot through the pride of the nation. He also added that protesting brutality is necessary, and it is a right, but it should not lead to violence.

Kamala Harris even spoke with members of Blake’s family and said that the police officer should be charged for crime as this was totally unnecessary given the circumstances under which Jacob Blake was shot.

The city is still under curfew, and there is an uneasy calm in the locality where the incidents happened. Law enforcement authorities were seen all over the place while people tried to lead a normal life.

The incident reminds everyone of the Black Lives Matter protest that recently rocked the country. Even though it turned violent and ugly in many places, it got good support from many other countries. Several leaders across the world condemned such police brutality and asked the US to work towards handling racism.

The timing of the incident was also very bad considering the ongoing coronavirus pandemic, and the protests also led to a surge in the number of cases in many cities. Many people were seen outside without masks, and social distancing went for a toss during such protests. The violence that followed the protests across the US forced many businesses to shut down for days together as properties were vandalized by rioters.

Not only that, the protestors even targeted many monuments of iconic leaders across the country, and it was seen as an attempt to attack the cultural spirit of America. Similar incidents happened in many other countries, and the crowd was totally divided when it came to commenting on the incident. Even though many people openly criticized the violence, they felt that the authorities are not doing enough to tackle racism. The atrocity of police, especially on black people, is nothing new, and such incidents have happened in the past.

Political parties are also trying to make the best out of this situation for their own gains as the elections are fast approaching. Each party is hell-bent on projecting the other one as unsafe for the future of America. While Biden is openly criticizing the killing of black people by police officers in such incidents, Trump is careful to avoid such comments on police and instead of trying to talk about the violence that followed such incidents. Trump even questioned Biden on his silence on the violence during the protests and said that Biden winning the elections will make it unsafe for American citizens.