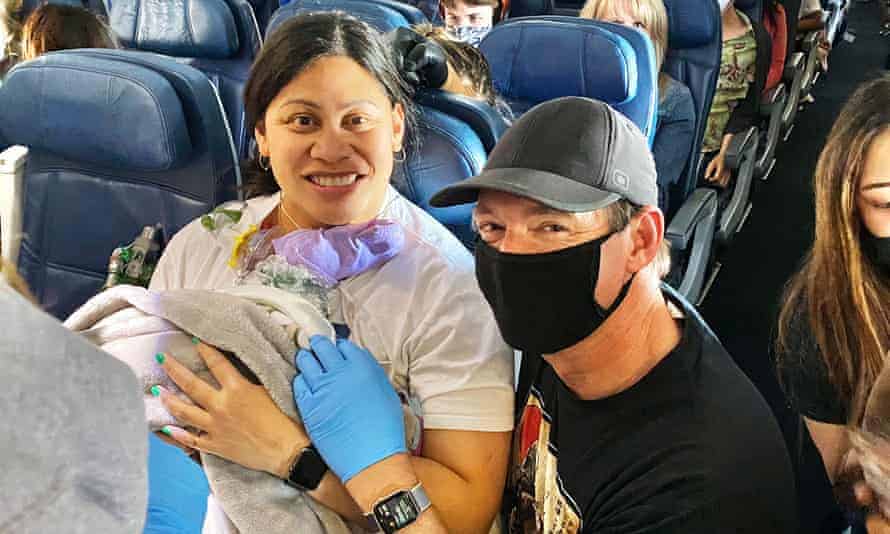 There is a famous line ‘right thing at the right place ‘. And the true example of this line will be justified when a 29-week gestation baby was going to be delivered on the flight and what coincidence or one can say that it was God’s grace that a team of neonatal medical professionals, including a doctor and three nurses, were also boarding in the same flight.

They helped in the delivery of the baby boy with both mother and baby in good condition. One of the co-passengers, Sierra Rowlan and her friend Julia Hansen said in the Washington Post that initially there was lots of commotion and they were very confused, but the situation was pretty well under control and other passengers were very casual about it.

This all happened when a pregnant woman Lavinia Mounga was boarding delta airlines from Salt lake city to Honolulu, Hawaii, on 28 April for a family vacation. During the mid-journey, there was an emergency call, and they asked for any doctor on board because Lavi was getting into emergency labor and going to deliver her baby.

According to Dr. Glenn, he experienced many onboard health emergencies, but the delivery of a baby on a flight will be a first time thing for him. Yet his team was professional and sprung into the procedure without any special equipment for the premature baby. They used their shoelaces to tie up the umbilical cord and cut it and used an Apple watch to measure the baby’s heart rate and to keep the baby warm; they used microwaved water bottles.

This was done in a small confined place in an aeroplane. It is complicated for them, but their teamwork and coordination were so great that they easily delivered the baby, and yes, the mother also didn’t undergo any problems.

Everyone was looking back and trying to get information about what’s happening with lots of commotion between the flight attendants as they are switching. After some time, the captain switches the speaker, and everyone is waiting for any announcement, but it is complete silence, and then they get to listen to a small baby crying.

They declared the baby’s name Raymond Mounga openly, and all the passengers started to clap. After landing, the mom and her baby accompanied first. The medical crew were already waiting to take them to Kapiolani Medical Centre for women and children. They took them for better observation and care. After 3 days on Friday, the three nurses were allowed to visit Lavi and her son; it was a kind of emotional reunion for them.

They cried, and Lavi called them her family. Laviana got discharged after some time, but her baby was still in NICU because of premature birth. The three of the nurses also started a GoFundMe page asking for donations for the mother and baby so that they can easily stay in Hawaii till their baby gets better. Hansen shared a TikTok video taken and posted by fellow passengers in which from the announcement of the birth of a baby to the cheering by the passenger and after 3 hours the EMT carried the mother and baby after landing all was there is a perfect order which yields around 11 million views.