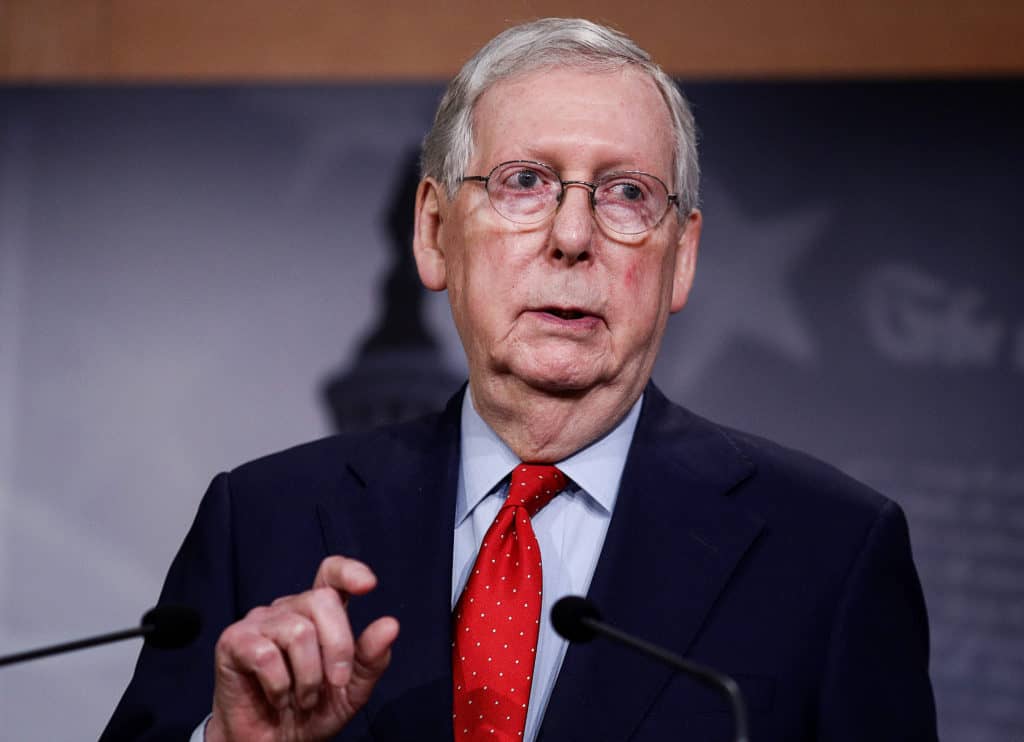 Mitch McConnel is a senior leader from the Republican Party in the United States. He is always vocal in his addresses that need urgent attention.

This time the matter is serious. Included in the nationwide average of 40% of Americans who are yet to get vaccinated with the recommended doses of the Pfizer and Moderna vaccine are those who are refusing to get vaccinated and some who are avoiding vaccination. There is indeed an increase in coronavirus cases in the United States. Cases have increased in terms of a 36% increase in hospitalization and a 26% rise in deaths due to the deadly virus which seems to return with renewed power in new mutated versions periodically.

McConnell Asks Americans To Get Vaccinated Or Risk Shutdown

McConnell chose to ignore the stand of some of his fellow Republicans who have refused the vaccine and warned Americans that they would have to face lockdowns and widespread shutdowns if they did not help stem the increase in infected cases by taking both doses of the vaccine. Republican McConnell also ignored the comments by his fellow Republicans and even members of Congress who have mocked the effect of the vaccines. He urged Americans not to listen to this remarkably bad advice and literally get their shots in the arm.

Mitch McConnell, himself a polio survivor, has given his own example of how the development of vaccines has almost eradicated this once dreaded disease. He urged fellow Americans to get themselves vaccinated and stop the new mutant virus to spread further.

Meanwhile, Director Rochelle Walesky of the Centre for Disease Control and Prevention (CDC) reported that there has been a 70% increase in cases of Delta variant of the Coronavirus. She went on to declare the pandemic as a pandemic of the unvaccinated. Statistics seem to prove her right as a survey has found that 97% of the reported cases are from unvaccinated people.

4 states in the united states which have been identified as Arkansas, Florida, Missouri, and Louisiana have the highest number of covid positive cases and these are the very states that have the lowest numbers of vaccinated people whereas the National average for vaccinations is 48%.

In the wake of Mitch McConnell’s weekly address from Capitol Hill, there is widespread action across the United States for increased vaccination.  Attempts are being made for approval for the vaccination of children as there is an increased risk of them falling prey to the ongoing fourth wave of the pandemic. Several medical centers, including St. Jude’s Children’s Hospital and several medical centers in the state of Idaho, have made vaccination compulsory for their employees and staff.

This has led to the kind of protests that Mitch McConnell terms as unfortunate. There was a widespread protest recently at the Idaho Capitol against the rules for employees of health care systems to get themselves vaccinated. Staff was protesting against what they perceived as forced vaccination.

Meanwhile, the vaccine for Pfizer and its business partner BioNTech has not been approved as yet and is being administered under the clause of emergency use only. Pfizer has only 2 months’ performance data as against the stipulated 6 months for it to become a legally authorized drug. This is exactly the reason for the protests in Idaho as health workers did not wish to take a vaccine that had not been legally authorized as a licensed drug.

Apparently well briefed on the data, Republican leader Mitch McConnell’s advice seems to be genuine as he does not want his country to go back to the high incidence of cases that occurred in the United States during the previous year.