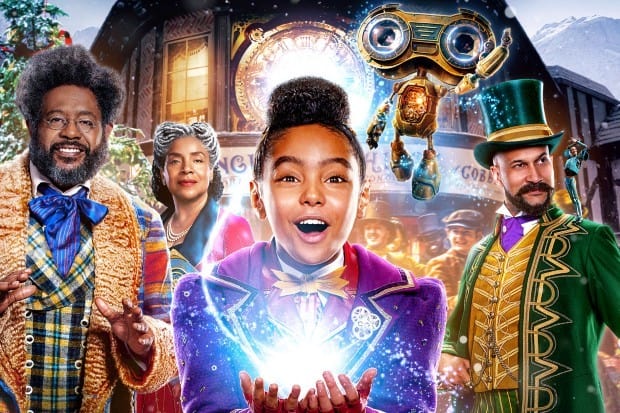 Netflix has some exciting lineup of movies for the holiday season. One of the best movies on this list is Jingle Jangle- A Christmas journey directed by David Talbert, who is well known for movies like Almost Christmas and El Camino Christmas.

David Talbert said that this is the kind of movie he wants to introduce to his son and hopes that his son could reflect something in the movie. He added that when his attempts to introduce his son to some classics like Chitty Chitty Bang Bang failed, he realized that it is now time for a feel-good movie that has lots of music and comprises all people of color cast.

Talbert said that when he put Chitty Chitty Bang Bang at home for his son, he noticed that his four-year-old son soon lost interest and started playing with his toys. It was this moment that made him think about all the people-of-color festive movies. He added that his son could not find himself in the movie, and most of the earlier movies had a complete white star cast.

Jingle Jangle is a complete package of emotions that everyone is familiar with during the holiday season. During this time, most people gather at home to meet families and friends around the world. The movie, which has a diverse cast, will appeal to everyone in the family during this festive season. The timing of the release could not have been better as most people are now stuck at home due to the ongoing coronavirus pandemic, and there are few options available outside at movie theatres.

Considering this situation, Jingle Jangle is getting the right platform with Netflix, and it can have a wider audience in this manner, even during the pandemic. Due to the ongoing health crisis, most theatres around the world are either closed or not running to their full capacity. Many big-ticket movies had to be postponed as they could not recover their cost by releasing on streaming platforms. They are waiting for theatres to open completely next year so that they can get a grand release in movie theatres.

Coming to Jingle Jangle, the movie also has a universal theme that will appeal to everyone during this holiday season. Talbert says that he is also trying to include people of color in places where you normally don’t get to see them in movies. In this way, it is a unique attempt to include people of color in mainstream movies and present them in a new light. This movie is expected to garner good support from everyone for its wholehearted attempt.

The story of Jingle Jangle is simple, and it deals with a brilliant toymaker Whitaker who wants to create a new toy for children before the arrival of Christmas. However, he has to cross some hurdles when his book of inventions gets stolen by other guys. At this juncture, his granddaughter, Mills comes to his rescue to reawaken the magic within the toymaker.

As the whole world is in a dull mood due to the ongoing pandemic, movies like Jingle Jangle are needed to bring in some joy during the festive season. The Director says that the movie has good emotions about healing with family and giving second chances, which is the need of the hour during this crisis situation. Most people are suffering from the coronavirus pandemic in one way or the other, and they will be able to relate to the emotions in the movie.

The movie has a lot of fantasy elements, and characters fly around in the house. The Director of the movie said that they had to take proper training for these shots, and they first started with going around in straight lines to get a hold of the flying task. After that, they began to move the artists in every direction using sophisticated equipment. He says that shooting such scenes were a lot of fun and challenging at the same time.

As the number of coronavirus cases is increasing at a fast pace across the country, many movie theatres are finding it difficult to function normally. According to the latest health guidelines issued for movie theatres, they cannot have full seating capacity and they need to provide sufficient space in between the audience to maintain social distancing. This clearly means that the capacity of these movie halls are going to be reduced by at least half while their expenses are shooting up due to sanitizing and other requirements.

Given this situation, the movie theatre owners are not in a position to open the theatres in many places. Even the ones that are open are finding it tough to get the right movies that can attract a larger audience like before. Most people are still scared to go out to movie theatres as there is a risk of getting infected in crowded places. As the movie theatres mostly function in closed halls, it is not an easy task to control the spread of the virus in such an environment.

Some theatre owners tried the drive-in theatres that would allow the audience to sit in their own cars and enjoy the movie on a big screen. However, even such attempts were not successful in a big way as many people did not find exciting movies in such places.

This is where online streaming platforms like Netflix made all the difference to the entertainment industry. Netflix has lined up several movies of different genres for the holiday season, and movie lovers will not miss out on entertainment in this festive season. Jingle Jangle is one of them, and it has all the required elements to make for a family watch. The trailer that was released recently got a good response, and it looks promising from every aspect.

The movie is all set to be aired on Netflix next Thursday, and you can watch it at home with friends and family. Your kids will love the magical elements, and you can relate to the emotional aspect of the movie.