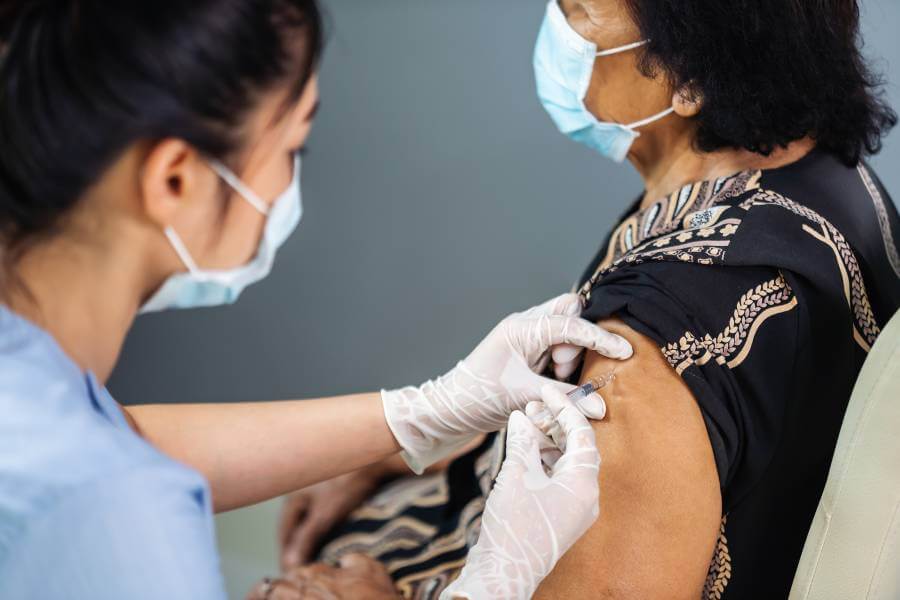 Abigail Matos-Pagan entered a blue house that was brightly colored in Mayaguez this summer. She was met by Beatriz Gaston, who led the way to her mother’s room quietly. Matos-Pagan had come to provide Wildelma Gaston with a Covid vaccine. Her arthritis and other health concerns had confined her to the bed.

Matos-Pagan injected the first dose of the vaccine when Wildelma Gaston pointed out her ‘good arm’ and asked for her rosary to be placed on her chest.

The 5 members of the Gaston household, collectively breathed a sigh of relief.

Wildelma had been unable to reach a site that provided vaccinations, even though the vaccine had been available for a multitude of months.

Puerto Rico’s vaccination rate was one of the lowest in the country despite it receiving more than 1.3 million doses, according to the Centers for Disease Control and Prevention.

The disparities in access to medical services and the challenges of reaching and tracking citizens in remote places were highlighted by this rollout.

The family members grew increasingly concerned with every trip to school or work that might have brought the virus into the home and threatened Wildelma’s life.

Two of Beatriz’s children were also vaccinated by Matos-Pagan during this visit.

Beatriz Gaston said that they had been awaiting this particular moment for a very long time as she hugged Matos-Pagan goodbye. The vaccine held great importance to her as it paved the way for her family to be in the presence of her mother.

It was Matos-Pagan’s latest calling. This practicing nurse, who guided relief efforts after hurricanes and earthquakes in Puerto Rico has undertaken this mission to vaccinate as many people as she possibly can against the virus. She has been named vaccination queen by the locals for what she has been doing for them.

As of Friday, according to The New York Times’ case tracker, Puerto Rico has had over 182,000 cases and over 2500 deaths. Almost 57% of the population has been fully vaccinated, but many of the people who are not fully vaccinated are hard to reach due to their residences being in remote areas like mountains. Another reason why they are difficult to reach is that some of them have chronic illnesses that leave them bedridden.

Matos-Pagan has helped vaccinate over 1800 people so far.

During the early days of the pandemic, Carmen Blas’ health declined, and she began utilizing a wheelchair. She was confined to her home which was on the third floor of an apartment building. This shielded her from contracting Covid, but she was not able to find transportation to a site where people were being vaccinated. In June, when her two children visited, got vaccinated by contacting the public health authorities.

Raymond, one of her children said that he usually visits every year and this had been the longest he had not seen her. He added that it was hard to see that his mother’s health had deteriorated and was worried that he might have never been able to see her again.

Matos-Pagan came to their home to give Blas the vaccine.

Matos-Pagan later said that it had been very special for her to have such intimate moments with someone else’s family during these vaccinations.

Mobilizing during a crisis is a usual activity for Matos-Pagan. After Hurricane Maria cut off water and electricity to the entire island, she conducted initial assessments in some of the territory’s hardest hit and remotest cities. This hurricane took the lives of more than 3000 people due to flooding and debris.