After intensifying overnight into a Category 2 storm, Hurricane Sally lurched ashore early Wednesday, threatening to swamp the Gulf Coast and Southeast with heavy rains and unprecedented floods. The floods have brought the nation on its knees and have hit the cities hard. 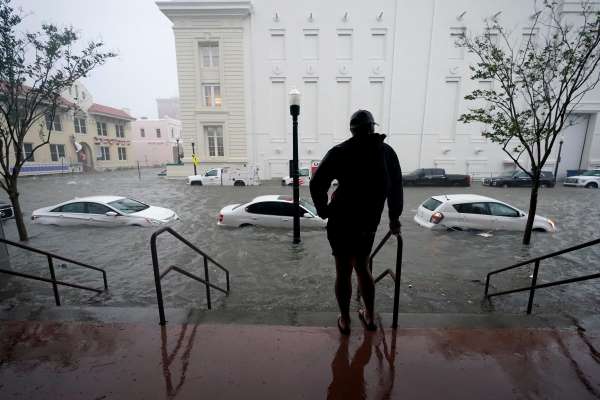 All you can see is broken homes and businesses and property loos to the core with eyes looking out for evacuation. The powerful winds from Sally are battering Pensacola, Florida, and the storm’s sluggish speed means the rains will bring catastrophic and life-threatening flooding. Hurricane sally has hit the land early at 4:45 a.m., according to the national hurricane centre. The winds are expected to blow at the speed of 105 mph.

Sally is turning out to be creepy. It is expected that the core will pass all across the Florida Panhandle and from the South East of Alabama in the early morning of Thursday.

Sally has proved to effected life to a great extent, and the people face massive trauma because of that. Alabama: With The Rescue Works Going On, The Life And Businesses Have Been Affected To The Core The forecaster and the national weather service have informed that Hurricane Sally is proving to be catastrophic. It has made the lives of people miserable. There are broken homes and worst affected businesses all across. There are currently two flash flood emergencies in place for coastal Baldwin over to Fort Walton Beach. Eversole said he’d got reports of damage to some condominiums in the Gulf Shores area and damage to the Surf Shop and Pink Pony Bar. Debris in Orange Beach hit some condominiums as a boat drifted between some houses.

He said, We know that people are being saved, and we know significant property harm. History is repeating itself, and Hurricane Sally is following the path of Ivan. Sixteen years ago, when Hurricane Ivan had hit the shores, it devastated the lives and caused a lot of property and life loss. According to the weather department and the forecasters, Hurricane Sally is following the same path and proves to be more destructive. Hurricane Sally passed from Flora-Bama beach without any destruction. The most famous and well-known beach bar in the country is standing rigid without any loss as the Hurricane Sally passed without causing even an inch of damage. According to a photo posted by a rescue team on the morning of Wednesday at 5:23 a.m., there was no damage noticed. The photograph shows no visible damage to its roof or walls. Still, it shows rising water circling the iconic bar at the Alabama and Florida border.

Rescue workers are leaving no stone unturned to save the people stuck in floodwaters in Okaloosa County, Fla. The rescue workers are giving their best and are working hard to rescue the people who are stuck in the floodwaters. The team was again called upon on Wednesday morning to help evacuate the people stuck in Okaloosa County.  Pensacola has been receiving more than 30 inches of rain by Sally. The city has been witnessed as the worst affected one, and the forecasters are predicting that the worst is yet to come and hit the lives with a hard blow. The Mobile National Weather Service confirmed a qualified spotter in Northwest Pensacola, estimated at 30 inches of rain. NAS Pensacola reported rain and wind gusts of 24.8 inches, up to 92 miles per hour. A rare flash flood alert warning was issued by the Weather Service earlier Wednesday.

The flash flood presents a significant risk of property damage and lives, as told by Dave Eversole. He is a well-known meteorologist. He further explained that this means that people are bringing out people and trying to save themselves and their neighbors too. He also said that one of the two essential warnings that they are facing right now is the tornado’s upcoming risk. Due to high sustained winds, Interstate 10, eastbound and westbound, is also closed at the Escambia Bay Bridge. Jim Cantore of Weather Channel in Pensacola Jim Cantore, the Weather Channel’s famous weatherman, was monitoring the storm in Pensacola early Wednesday. Cantore is renowned for reporting on some of the country’s worst weather conditions.

He tweeted a video of strong winds breaking through the city on Wednesday morning, and shots from the Weather Channel showed him beaten by heavy rain. Sally is the 8th storm that has been named in this year 2020 Sally has been the 8th storm in 2020 that has been given a name. This has surpassed the record of 6 storms in the year 1916. The description in a single Atlantic season for most continental U.S. landfalls is nine and set in 1916. Sally’s eye core made landfall at 4:45 a.m. Near Gulf Beaches, Alabama local time. Weather forecasters have their eyes on the storm and are praying that it passes out without any further destruction. Their lives are shattered; the people have been left homeless. There are a lot of them out there trying to cover up for their loved ones.

A lot of volunteer groups have come forward and are looking out to help the needy. The hurricane is expected to get stronger by Monday as it is travelling towards Louisiana and Mississippi. Also, it is expected to witness high water on Monday in Florida. Stay hooked to know about the latest happenings and all other details of the hurricane.