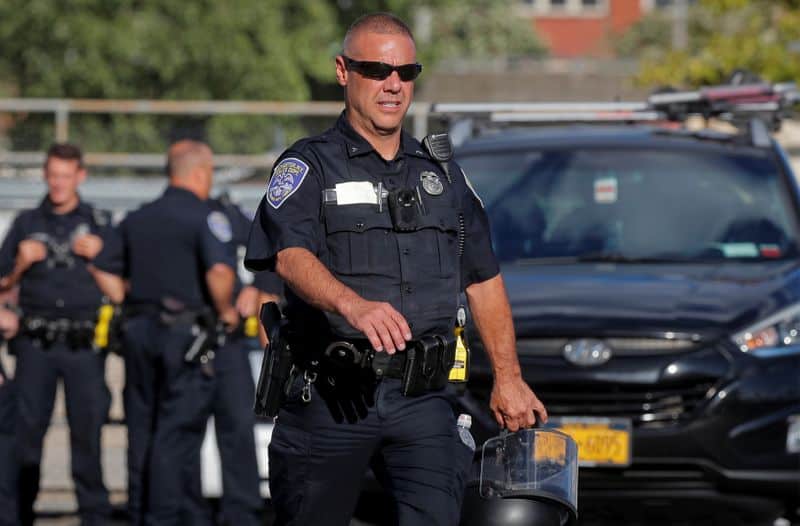 The death of Daniel Prude sparked a lot of protests across Rochester. An interesting thing observer spotted during the protests was that police officer had covered their nameplates on the uniforms. This action by the police has led to a lot of debate, and it is becoming common in many other parts of the country.

Reacting on this issue, the Rochester Department has said that police officers are allowed to cover the nameplates for their own safety. In recent months, it was observed that many protesters took photographs of officers and later issued threats to their family members and even circulated their names and address on social media platforms. Considering all these issues, the police department has allowed police officers to cover their nameplates on uniforms. In recent months, protests have become common across the country for various reasons. The excessive use of force by police during arrests is one common issue, and it has even triggered the Black Lives Matter movement across the country. Other than that, many people call for police reforms as they tend to use excessive force while handling crowds during protests.

As per the official document that issues proper guidelines with regards to the uniform and accessories that police officers need to wear on duty, the name tag is one of the primary requirements. The document even clearly mentions the placement of the nameplate on the uniform, depending on the dress, and it is given with a lot of precision. According to the official document, the nameplate is supposed to be worn on the right pocket flap, and it should be centered one-quarter inch below the top pocket seam of shirts. A similar approach is followed when women officers are wearing blouses and leather jackets. It is to be worn on the right breast of the authorized sweater.

However, many police officers had covered the nameplates with black tape and other materials during the recent protests. This has invited a lot of criticism and raised a lot of questions about transparency in the law enforcement system. The protesters and activities demanded an explanation into this trend of police officers concealing their nameplates while handling crowds during the protests. The Rochester Police Department issued a clarification into this matter on Thursday and addressed the media. The spokesperson for the department said that the previous requirement of the mandatory nameplate on the uniform has been waived off in May. This was done to protect the identity of the officers handling the crowds during the violent protests.

In recent months, many clashes have happened between the police and protesters on several occasions, and the police have often been criticized for the way they have handled the situation. It was observed during the recent protests that several protesters took pictures of the officers, and it was later found that the names and home addresses of some officers were circulated on social media platforms. The spokesperson of the police department said that one of the officers had even reported about receiving threats for his family. Some protesters had warned officers of violence against their families, and this has been recorded officially by one officer. In this regard, considering the safety of the police officers, the removal of name tags has been approved, and police officers on duty can conceal their nameplates.

However, the city council member Michael Patterson said that it was inappropriate for the officers to remove the nameplates while on duty. The regulation is not the same across the country, and different departments have different guidelines for their officers. However, a common trend is seen among police officers that they are not wearing their name tags, especially when handling violent protests as it can reveal their identity and lead to problems in the future. Even when there are strict guidelines in this regard, some officers are accused of not following them during protests. According to the Monroe County Sheriff Office spokesperson, the deputies who are on patrol with the department are required to wear the nameplates that are clearly visible when they are on duty. It has to be worn along with a badge on the outermost garment as per their guidelines.

As per media reports, many police officers in Buffalo had come under scrutiny for not wearing name tags while handling protests in the city. They had covered the name tags with tapes on most occasions while handling the crowds. Clarifying the issue, Mayor Bryon Brown said that it was confirmed that officers were not wearing name tags during the recent protests, and it was done for their safety as the police department had become the target of threats. It was also the target of doxxing by the protesters. He added that people had become very intrusive and invading into the personal lives of police officers. When people want fairness, they should also allow that with the police department.

He also insisted that any person making threats to police officers should be charged for the crime, and this trend has to be curbed in the initial stages. At the same time, he also said that officers should also follow the guidelines and keep things in a transparent manner. As the name tags were a mandatory part of police uniform, he said that it is the responsibility of the police officers to act in a transparent manner by displaying their names and badge numbers. A similar situation was seen in Chicago and Seattle when police officers were seen handling crowds without displaying their name tags. Such incidents also came under a lot of criticism by activists and protesters.

Portland, which is the main region for many protests in recent months, also saw similar problems, and the police had many clashes with violent protesters. In this situation, the police chief had issued instructions to officers that they are allowed to cover the name tags, and they can display the city personnel number in that situation. This was done to protect the officers, and it was a welcome move according to many officers handling such violent protests on the streets.