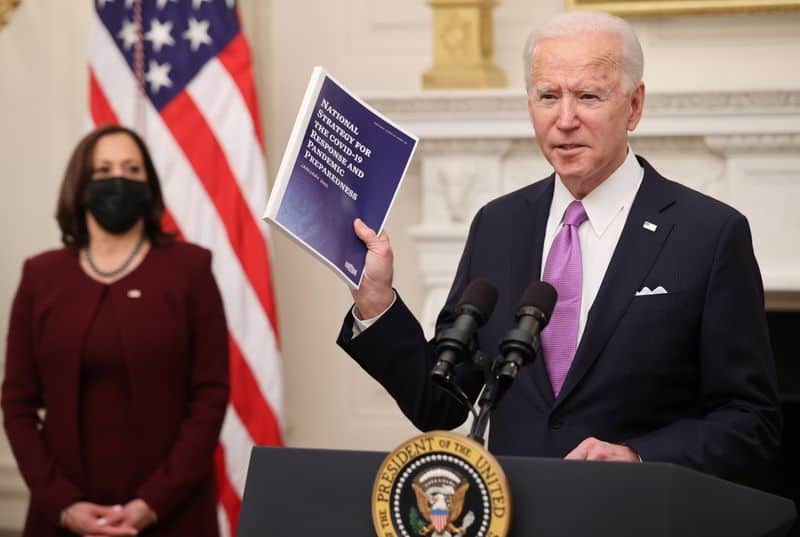 Ten Republican senators have asked President Biden for heavy cuts to his $1.9 trillion pandemic aid bill offering a $600 billion alternative that they said could get bipartisan support for quick passage, The New York Times reported.

According to commentators, Democrats do not seem likely to consider their proposals and are gearing up to move ahead with their sweeping package —overriding Republican concerns.

In their bid to not allow a replay of their miscalculation of 2009, when they controlled the government last time, the White House and top Democrats are determined to push ahead with the bill during an economic crisis.

They seem unwilling to brook any dilution or significant changes, with no certainty of getting Republicans on board.

Senator Chuck Schumer, Democrat of New York and the new majority leader, said the dangers of undershooting their response were far greater than overshooting, The New York Times reported.

He added that we should have learned the lesson in 2008 and 2009 when Congress was too constrained and timid in response to the financial crisis.

They seem to be banking on the strategy of 12 years ago, when Barack Obama became president, with Democrats controlling both houses of Congress. At the time, they tackled both a major health care overhaul and a sweeping economic package.

According to Democrats, in their quest to get Republican support for both, they settled for an economic stimulus that fell much short of their projections and engaged in talks with Republicans for too long.

That view was behind the tepid response on Sunday to the Republican offer. The Senate Republicans have asked for a meeting with the President to offer a substantially smaller stimulus proposal.

The 10 senators had said in their letter that on crucial areas such as vaccine distribution, their priorities aligned with those of Mr Biden.

However, members of the group clarified in interviews on Sunday that their plan amounted to less than a third of Mr Biden’s proposal. Though Democrats said they would review it, a comprehensive legislative response would be needed.

Talks with Republicans would likely continue, and on Sunday, Mr Biden invited Senator Susan Collins of Maine along with other Senators who had signed the letter to the White House this week.

But Democrats this week will initiate a budget process known as reconciliation that does not allow filibuster. With it, they would be able to push through the pandemic legislation on their own if there was a failure in the emergence of a bipartisan agreement.

That possibility has Republicans calling out Democrats for not sticking to their bipartisan commitment, warning that the effort would have repercussions on reaching bipartisan deals.

Commentators point out that the objection ignored that  Republicans in January 2017 had initiated their own reconciliation process even before Donald J.

Trump was sworn in as president, which set the stage for enacting a $1.5 trillion tax package passed without a single Democratic vote.

Senator Lisa Murkowski, Republican of Alaska, one of the signers of the new letter, asked that the Republicans were giving an opportunity to come together on important and timely legislation, so why would Democrats not do that rather than trying to move it through with reconciliation and having a fully partisan product, The New York Times reported.

While the plan had to be rolled out yet, according to members of the group, they would omit Democrats’ proposal for a federal minimum wage increase and cut down direct stimulus payments to individuals, excluding Americans over $50,000 a year or families have a combined income over $100,000.

Senator Rob Portman, Republican of Ohio, said on the CNN program, “State of the Union” on Sunday that the focus that they should focus on those who are struggling, the New York Times reported.