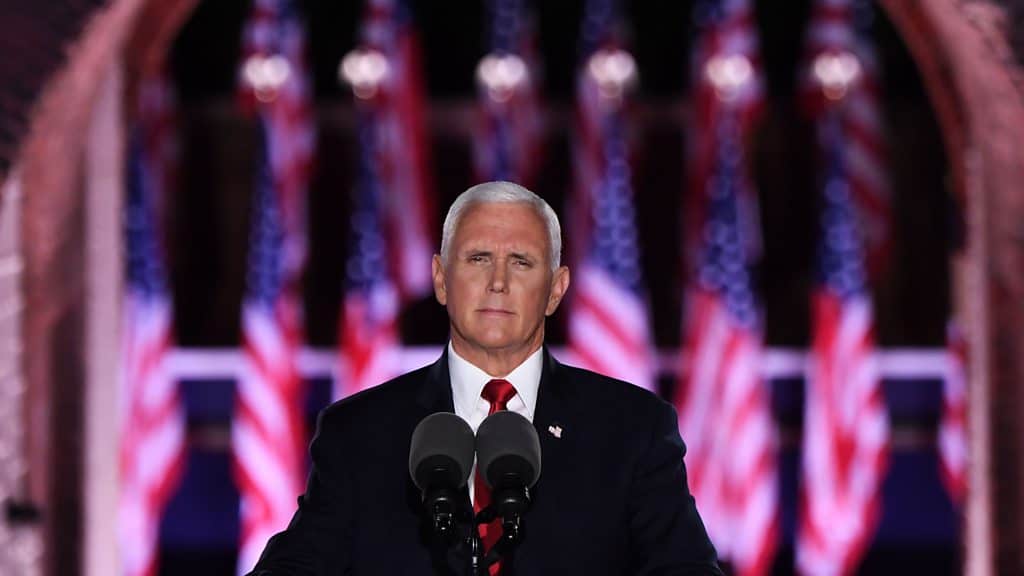 Speaking to the Republican convention, Mike Pence said that Americans would not be safe if Joe Bidens comes to power in November. He warned that violence would spread across various cities of America if Biden wins White House elections. He said that voters have to choose between lawlessness and law-and-order when they go for elections this November.

As the protests against shooting in Wisconsin became intense, Pence was dropped from speaking at the Wisconsin college. He, however, did not refer to the incident while speaking even though he mentioned violence during recent protests across many American cities. However, the spokesperson of Pence did not oppose the actions of the College authorities and said that the interest of the students is more important at this stage, and their security is of utmost importance. The college found another replacement for Pence to speak at the event.

Pence said that American people were aware that they need not choose between supporting law enforcement and African American neighbors in order to maintain peace and harmony in the cities and towns. He also criticized the statement of Biden, which spoke about bias against minorities and systemic racism in the US.

Pence has been working as a loyal supporter of Donald Trump for all these years and executing his directives on every occasion. His current mission was to pitch Trump for president’s reelection by highlighting his achievements. He has been very careful to sideline the shortcomings of the Trump administration.

Even during the reopening of schools, Pence actively supported the Trump administration’s measures and even criticized the CDC on some occasions for being too strict with the reopening guidelines. The schools and colleges across the country are set to reopen this season, and the Trump administration is eager to bring back normalcy across the country even during this pandemic situation.

The CDC had issued warnings against such moves as this can lead to a spike in the number of cases, and children can easily get affected if proper care is not taken in public places. However, the guidelines were later tweaked in favor of reopening the schools. The CDC has issued strict guidelines for the school authorities, and they have to follow it regularly to keep the children safe from infection.

Pence had taken the issue aggressively and spoke in favor of schools’ reopening after consulting the experts. The Trump administration also downplayed the issue of shortage of hospital beds across various states during the pandemic. Many hospitals were running to their full capacity at the beginning of August, which can lead to a dangerous situation if the infection rates do not come down in the coming months.

The Kenosha shooting has had an impact on the recent statements by Pence and other politicians across the country. Pence, who was supposed to speak at the Wisconsin College, was dropped from the event after the shooting at Kenosha led to massive-scale protests. The NBA, along with women’s NBA and Major League Soccer, postponed the games after few players did not show interest in being part of the protests.

This was something similar to what happened during the Black Lives Matter protests that were held across the US recently. It all started with the killing of Blake brutally by the police, and the manner in which the entire situation was handled left everyone angry about the incident. Blake was shot brutally from close range seven times in the back when the police were called in for a domestic incident. The fact that the killing happened right before Blake’s children also ignited many sentiments in favor of the protests.

Even during the Black Lives Matter protests, the mobs went rampant due to police atrocity against a black citizen. The brutality went viral, and it was all over the media. Many people gathered in protests that slowly turned violent. This happened during the peak of the pandemic, and some health experts even attributed the rise in cases to the protests. Many businesses were vandalized, and the protests did not stop in one state. It went on throughout the country and even beyond borders.

In an interesting situation, many people across the world supported the movement, and the Black Lives Matter protest got international fame within no time. Supporters from all over the world believed that the police department had done injustice, and strict action should be taken against them to avoid such incidents in the future. However, looking at the track record of the police authorities in the US, anyone can say that such incidents will continue to happen despite the nationwide protests.

After the unfortunate shooting incident, rampant protests rocked Kenosha and other nearby areas, which saw a lot of violence. On Tuesday, three people were shot in which two died during the protests. The security was beefed up for the next two days, and the situation came back to control only on Thursday. Pence did not mention the incident in particular but referred to violence across the US during protests.

However, Trump responded to the situation and sent a Federal Law Enforcement team to Kenosha after an agreement with the State’s Governor. The US Department of Justice also initiated a federal civil rights investigation into the shooting incident.

Biden, along with Kamala Harris, spoke to Blake’s family on Wednesday and even posted a video supporting the protests. He mentioned that protesting brutality is essential in such a situation, and violence will not be tolerated during such protests.

There was some speculation that Trump would dump Pence in favor of other people close to him. But the Wednesday nomination of Pence as Vice Presidential nominee put all such speculations to rest.

The protests were held in many other cities like New York, Washington, and Seattle. Most of the places saw violent protests, and many businesses were vandalized by mobs. This has divided the crowd and political leaders in a big way, and it would be interesting to see how this pans out in the November election.