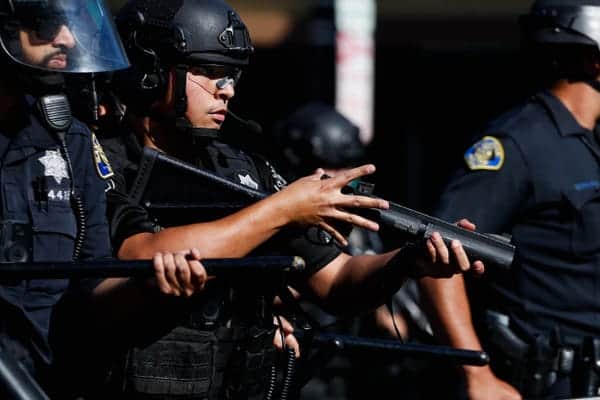 The states, along with local lawmakers and an International Police Association, are trying to impose restrictions on the use of rubber bullets and other less-lethal weapons during protests. In recent months, many such incidents have resulted in protestors getting wounded or blinded due to such assault by the police. Following such incidents, many protests are held across the nation to counter police brutality during protests.

As of now, at least seven major cities across the US and few states have imposed a ban on the use of projectiles and rubber bullets during protests. However, police agencies have opposed such moves, and this is still valid in many other states of the US. In the recent months, several clashes between protestors and law enforcement officers in Oregon, Portland, and Washington DC are being investigated by federal inspectors general. After the George Floyd incident, atrocity by police officers came into nationwide focus, and many legislators at all levels of government are looking into ways that can protect protestors from such brutality.

Following such moves by the authorities, the International Association of Chiefs of Police is planning to review their recommended policies on crowd control. It is a norm for them to use pepper spray and other impact projectiles that are less lethal during riots and protests. They feel that it is time to revise such policies in the wake of Black Lives Matter protests across the country. The agency also mentioned that some law enforcement agencies have done very well to manage the protests and crowds in some regions, and other agencies could have done better considering the incidents in the recent past.

During the recent protests, law enforcement agencies used bean bag projectiles and pepper balls filled with chemical irritants to handle riots and protests. This resulted in a lot of injuries to many people. According to a study conducted by the American Academy of Ophthalmology and Ophthalmology department of the University of California, at least 30 people suffered eye injuries during the recent protests, and about a third of them have lost vision in at least one eye permanently. Shantania Love was one among them who was part of a peaceful protest organized in California. She said that she permanently lost the sight in her left eye when police shot a less-lethal projectile in Sacramento.

The kind of injuries inflicted by such so-called less-lethal rubber bullets were shocking to even doctors. Medical professionals at Dell Seton Medical Center said that they have documented the rubber bullet wounds in recent months and sent them to the New England Journal of Medicine. Dr. Jayson Aydelotte, who is the hospital’s chief of trauma surgery, says that the injuries were so bad in some cases that it has broken bones and even made a hole in other cases. He added that they have documented the injuries so that awareness is created about the use of such weapons, and communities will be able to make informed decisions based on such reports.

The police chief in Austin, Texas, said that they plan to discontinue the use of bean bag projectiles on crowds in the future as it has caused many injuries beyond their expectations. However, many other law enforcement departments in the US continue to stick to their regular norms of using less-lethal weapons to handle crowds during protests. As per media reports, pepper balls were used on crowds by the Rochester police recently to control the crowds. Even Columbia police have used sting balls and tear gas during recent clashes when the protestors began to throw smoke grenades and bricks at the police.

Former New Jersey police chief Brian Higgins says that there is no national standard policy when it comes to using less-lethal projectiles, and there is no comprehensive information on its use during protests. The rules of the police department vary widely, and they have violated their own rules in many cases this year. The International Association of Chiefs of Police recently held a webinar on understanding the lessons learned from this year’s protests. As many as 800 officers participated in the webinar, and many crucial issues were discussed. They feel that some of the policies are too old, and they need to be modified to suit the current situation. The guidelines of the association with regards to using bean bag rounds and sponge have not seen any revision since 2002.

Apart from that, they should also understand the tactics used by troublemakers and some peaceful protestors and modify the crowd control policies. The presence of social media has completely transformed the way mass demonstrations are held, and this is enabling the crowds to gather in large numbers and that too in a quick time. Police officials have noted that some peaceful protests that had a small gathering of 30 or 40 people went to a size of 1000 people within an hour. However, many officials believe that even if such new guidelines are issued, it will be a hard task to bring it into reality as the law enforcement agencies need to be trained to use the new alternatives.

In July, Washington DC officials introduced a sweeping police reform that banned the use of rubber bullets and tear gas against nonviolent protesters. However, the chemical spray was used to disperse crowds on one such occasion when Trump paid a visit to the city. Similar moves were seen in Colorado when the state banned the use of less-lethal projectiles into the crowd. It also suggested the law enforcement officers to not aim them at the head or pelvis of protesters.

The Department of Justice and Department of Homeland Security are now looking into various such violations by the police during the recent protests. As per the reports released by Amnesty International USA, as many as 125 violations were recorded as police officials acted brutally against protesters and journalists in many states. In this situation, it would be interesting to see what reforms will be made soon to handle such crowds that turn violent during protests.