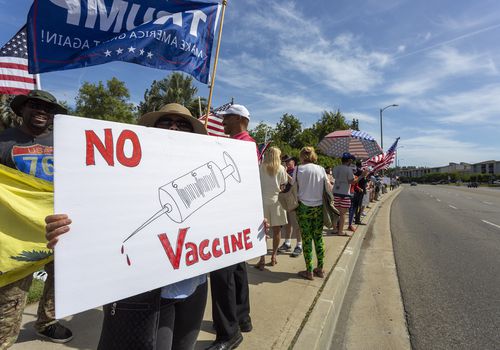 Schools around America are preparing to reopen this Autumn. Many states are taking necessary measures to stop schools from mandating students to be vaccinated or to have proof of vaccination.

7 states have – Alabama, Arkansas, Indiana, Montana, Oklahoma, Florida and Utah have passed such laws and 34 other states have introduced bills that would curb requirements for an individual to demonstrate their status regarding vaccination.

Public health officials have been left worried about the restrictions these laws could place on attempts to curb the spread of Covid and the arising variants.

Every time there is legislation that possibly limits the health department from trying to stop the spread of the virus, it’s another step that local departments would have to endure if there is an outbreak.

The numerous laws take multiple approaches, but the finality is that schools cannot require vaccinations to be done or even require proof of vaccination.

Governor of Alabama, Kay Ivey, gave his assent to a bill that states that institutions may continue to mandate a student to provide proof of vaccination as a pre-requisite for attendance only if this vaccine was already required by the institution as of Jan 1, 2021.

Clearly, this was meant to exclude the new Covid vaccines.

In Arkansas, its new law mandates that a Covid vaccine should not be a condition for education.

In Florida, a new law prevents educational institutions from requiring students to provide proof of vaccination. While, in Indiana, a similar law was signed into law in April that states that the state may not issue or require an immunization passport.

In Montana, a law signed says that it is a discriminatory practice to withhold or deny education to a person on the condition that he is not vaccinated.

Public health officials are worried that prohibiting a specific vaccine requirement could affect public opinion around both vaccines.

Another factor that is slowing the implementation of vaccine mandates is that vaccines are still under emergency use authorization. There are tons of people that are waiting for it to go from FDA emergency use to full licensing which is likely to happen this fall.

New infections are increasing in the country and at the forefront of it all is the delta variant and Fourth of July celebrations.

During the past 3 weeks, new cases per day have become twice as many as they were before. The numbers are up to an average of 23,600 a day, an increase from 11,300 on June 23. All states except South Dakota and Maine have reported that case numbers have skyrocketed over the last 2 weeks.

It definitely is not a coincidence that this is occurring right after the 4th of July celebrations.

Yet, the new case count doesn’t even come close to the peak of ¼th of a million cases per day in January. Deaths are being counted at around 260 per day while in winter, it was more than 3,400 a day. This illustrates the power of vaccines.

Health authorities in LA and St. Louis are requesting people who have been fully vaccinated to use their masks. Chicago announced that travelers arriving from Arkansas and Missouri need to quarantine for 10 days or test negative for a Covid test.

In Mississippi, state officials have suggested that people over the age of 65 stay away from large gatherings due to them being the least vaccinated state and a sudden 150% jump in hospitalizations across the last 3 weeks.