Donald Trump has been able to fulfil his desire to make a mark in the history of America. He always wanted that the people of the United States must remember him still, and now they will surely remember him as the most consequential president of all times. He is just not ready to leave the power and has also stated that no matter what the results are, he is not going to leave the White House. 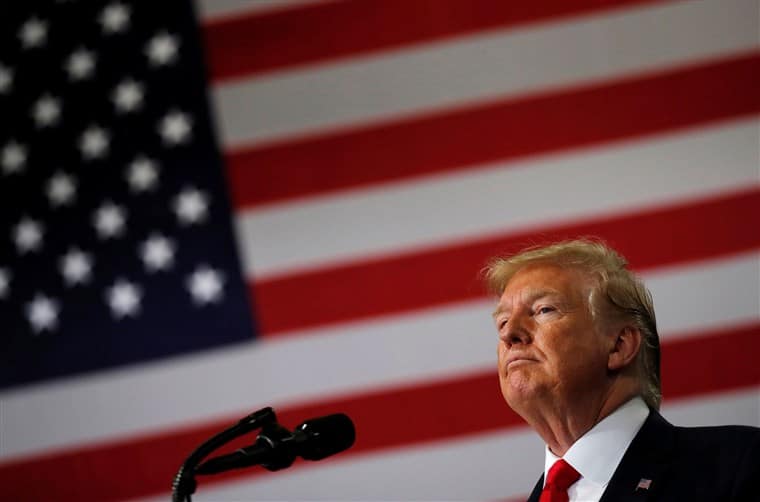 The business tycoon has been in love with the powers and always wanted to be in the limelight. Whether it comes to his carefree nature or the attitude that portrays him as a careless person, from his personal to professional life, he has always had a big mouth and has made statements that made people laugh on him. Still, he enjoyed this thing and was loved by his followers. You cannot ignore that yes, the people of the United States elected and chose him but then also regretted their decision. As the elections are coming near, Trump is getting adamant day by day. He knows that he might lose, but he is just not ready to accept the fact because of his big ego.

Another act of his has brought him to the centre again. Joe might be enjoying the campaigns, but Trump is the one who is living in the moment and is doing all such things that can make him come back in power. Though in a hurry but he has nominated his candidate for the place lying vacant after the death of Ginsburg. With his appointment to the Supreme Court of Amy Coney Barrett — and his expected confirmation by the Senate by the end of next month — Trump would have directly appointed one-third of the highest court members of the country and, for decades, to come, reshaped its philosophy.

Trump would have appointed more Supreme Court justices in his first year, assuming Barrett is confirmed, than any president since Richard Nixon, who appointed four between 1969 and 1971. And in comparison to Trump’s more than 200 appointments to lower courts during his first year in office, that is a huge number when it comes to looking at the past. It’s not too far to say that, with a big helping hand from Kentucky Senate Majority Leader Mitch McConnell, Trump has reshaped the judicial branch — from top to bottom — in a way his predecessors could only think of. And that, even if former Vice President Joe Biden defeats Trump in 38 days, it means that partisans for a decade or more will recall the 45th president for all that he has done. Now it is up to you whether you remember him for the good deeds or the evil ones. He has done what all he can do. The entire system was changed, and now all you can see is the resemblance of Trump wherever you go.

As Trump told Washington Post author Bob Woodward in May 2020 that he is going to be doing 280 judges in the future, and that will be a record in its way. That nobody’s ever seen. Two hundred eighties. Trump added that opening the federal courts is like golden nuggets. You can see him everywhere. No matter the wins or lose now the power is going to be with him in an indirect way, Given the age of Trump’s three appointees and their conservative makeup, that’s extremely valid. The youngest justice on the court will be Barrett, 48, preceded by fellow Trump appointees Neil Gorsuch, 53, and Brett Kavanaugh, 55. The second youngest justice is Elena Kagan, named by Obama, at 60. But then there is Chief Justice John Roberts, a 65-year-old George W. Bush appointee.

Therefore, three of the four youngest judges will be named by Republican leaders, with Trump placing the three youngest ones on the high court. And then there is the change in philosophy. The Supreme Court had four justices named by Republican Presidents (Roberts, Anthony Kennedy, Clarence Thomas and Samuel Alito) and four judges named Democratic Presidents (Ruth Bader Ginsburg, Stephen Breyer, Sonia Sotomayor and Kagan) before Trump moved to the White House in January 2017. The ninth seat, vacated in February 2016 by the death of conservative Antonin Scalia, had been left unfilled — as Republicans in the Senate declined to accept Obama’s seat choice: Merrick Garland.

But Trump really would bend to the philosophy of the Supreme Court with his most recent collection. The leading liberal on the bench was, without any doubt, RBG. Now in Barrett, who was a Scalia clerk and long a favorite daughter of the conservative juridical culture, another male will substitute her. Assume that Barrett has been approved — and McConnell seems to have the support — that the court would have a strong conservative majority of 6-3, with a marginally less crucial addition from Roberts, who was the late deciding vote on critical topics like the constitutionality of Obamacare. Ironically, Trump’s legacy will be only something that happened to him with all of his attempts to be remembered since he has left. The Republicans in the Senate who rejected Garland’s seat opened Trump’s door to appoint Gorsuch.

The retirement of Kennedy, about which Trump had no power, allowed him to position Kavanaugh on the Supreme Court. And now, after repeatedly battling cancer and vowing to remain on the courthouse until the 2020 election, the death of RBG has given Trump the seldomest opportunity: A major policy change over the next few decades. Trump has achieved what he always wanted to do. He has got the powers, and he had made the changes. If you take a look, then he has turned everything upside down. If Joe wants to change the things and properly mend them, then it will take him a lot of time to do so. The things that Trump did will be remembered for a long time. No matter you love him or you hate him, you will always get to see a piece od him in the history and future of the United States.