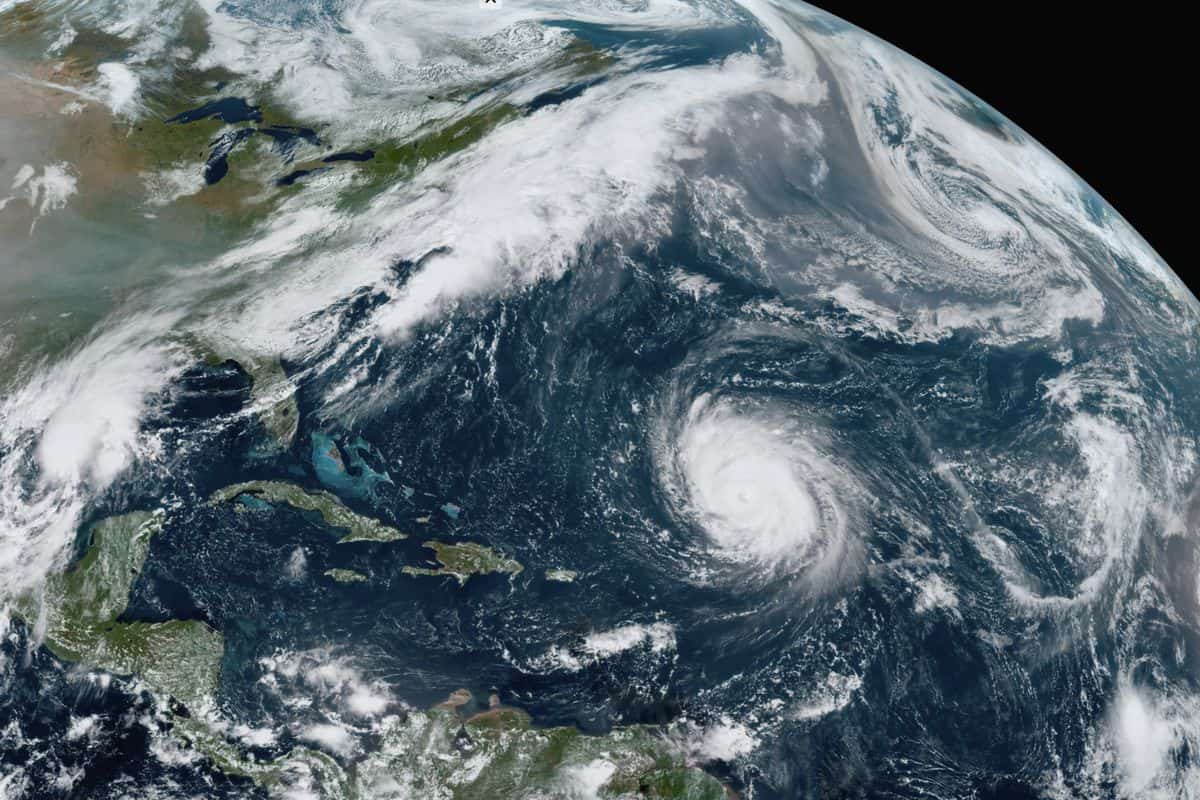 We now have a new thing to think about, as if the weather chaos of a historic hurricane season wasn’t enough. 2020 is the year that no one will ever forget. The National Weather Service went there and brought up a moniker in 2020 that we haven’t seen yet: zombie tropical storms. On Tuesday, the word emerged in an NWS tweet.

As one of the five active tropical cyclones brewing in the Atlantic Ocean, Paulette formed earlier in September. It was only the second time in history that there were several storms at the same time. On September 14, Hurricane Paulette made landfall in Bermuda as a Category 1 and strengthened over the island to a Category 2. The hurricane then lost speed and, downgraded to a post-tropical low-pressure system, lost its tropical storm status.

Ahead of Hurricane Paulette, which was expected to become dangerous on Sunday, residents of Bermuda were advised to plan to protect life and property. For five and a half days, the storm formerly known as Paulette had been stewing. Before this week, that is. According to the National Hurricane Center, Paulette regained power and became a tropical storm once more on Monday. Around 300 miles off the coast of the Azores islands, Paulette reappeared Monday. Storms have erupted at such a breakneck rate in this record-breaking hurricane season that forecasters ran out of names and were forced to move on to the Greek alphabet. But more than a week after it struck Bermuda, one of the storms with a typical name — Paulette — has come back to life.

The National Hurricane Center said that Paulette, which made landfall in Bermuda as a hurricane on September 14, regenerated near the Azores on Tuesday. Paulette, now a tropical storm, was forecast to become a low post-tropical remnant by the next day or so. Hurricane Teddy was moving towards Canada as Paulette was weakening, with an expected landfall in Nova Scotia early Wednesday before heading to Newfoundland on Wednesday night, forecasters said. The major and strong storm triggered hazardous rip currents across the U.S. East Coast, said the hurricane centre.

On Tuesday afternoon, Teddy was about 300 miles south of Halifax, Nova Scotia, with maximum sustained winds of 100 mph. It was expected to weaken by Wednesday, but forecasters said that when it moves in and over Nova Scotia, it will likely be a powerful, post-tropical cyclone. According to CNN meteorologist Brandon Miller, these zombie storms, including Tropical Storm Paulette, are rare, but they have occurred before. With such an active season, the most obvious contributing factor is water temperatures near historical levels in the Tropical Atlantic, which can serve as a high-octane fuel to power hurricanes.

For a tropical storm to sustain its strength, conditions will become hostile. Still, if it does not dissipate entirely, it will recover days later when conditions become more favourable. And this year is prime for these spooky storms with the apocalypse that 2020 has become. Since water temperatures are above normal for most of the Atlantic Ocean, 2020 is a good candidate to encounter a zombie storm. We are having a record number of storms — which increases the likelihood of regeneration, Miller said. This storm is barely moving; since late Monday it’s been raining non-stop. And all this water cannot be drained by Houston, which floods even during mild rain.

In Houston, more than 100 high-water rescues have occurred as the now-tropical depression barely budges. Let’s hope and pray that this machine can start going to the east at a faster speed to get out of here, said Mayor Sylvester Turner of Houston. The first storm to return from the dead isn’t Paulette. The last time this occurred was Hurricane Ivan in 2004. Meanwhile, large parts of Houston were left submerged by the remnants of Tropical Storm Beta. Cars and trucks are stranded-turned-rivers on the roads. What remains of Beta hugged the coast late Tuesday, and southeast Texas was supposed to lash out. Flood advisories are reported from near Corpus Christi, Texas, all the way to New Orleans along a 500-mile stretch of the Gulf Coast.

Suppose you’re wondering why the storm wasn’t called Gamma. In that case, it’s because it was still possible for meteorologists to monitor the vortex of the storm. This year, we had so many storms that we ran out of names and began to call them after letters in the Greek alphabet. Beta, the new storm, weakened to a tropical depression and on Tuesday stalled over Texas. On Wednesday morning, the U.S. National Hurricane Center was also tracking Paulette and another storm, Teddy. As a strong post-tropical cyclone, Teddy struck Atlantic Canada early Wednesday. Sometime on Wednesday, Paulette was forecast to become a post-tropical remnant low. According to Global News Chief Meteorologist Anthony Farnell, no new storms are anticipated to form in the next few days.

In the Gulf of Mexico, Tropical Storm Sally intensified at the same time. The storm had maximum sustained winds with higher gusts of 50 mph, forecasters said, adding that on Monday it was expected to intensify into a hurricane and hit the U.S. coast late that day or early on Tuesday. From Grand Isle, Louisiana, to Ocean Springs, Mississippi, including metropolitan New Orleans, a hurricane warning was issued. For parts of the Gulf Coast, a storm surge alert and a tropical storm alert were both in place. According to the U.S. National Hurricane Center (NHC), Paulette received hurricane status late on Saturday and was forecast to bring storm surges, coastal flooding and high winds to Bermuda.

As it intensified along a curved path toward Bermuda, the storm had maximum sustained winds of 80 mph. Powerful winds, storm surge, up to 6 in of rain and life-threatening waves and rip currents were the main threats. On Sunday morning, the storm was 280 miles southeast of the British Overseas Territories. It was the strongest in the Atlantic and the Gulf of Mexico in terms of winds from six disturbances the centre was tracking. John Bel Edwards, the governor of Louisiana, declared officials in New Orleans provided a state of emergency and a mandatory evacuation order for areas beyond levee security. It was expected that the storm surge would reach dangerous heights, partially due to the tide. From the mouth of the Mississippi River to Ocean Springs, like Lake Borgne, up to 11 ft of water was expected. Sally could produce up to 20 in of rain by the middle of the week, a slow-moving storm, forecasters said. At 13 mph, the device travelled west-north-west and was centred 155 miles west of Port Charlotte, Florida and 300 miles east-south-east of the Mississippi mouth.