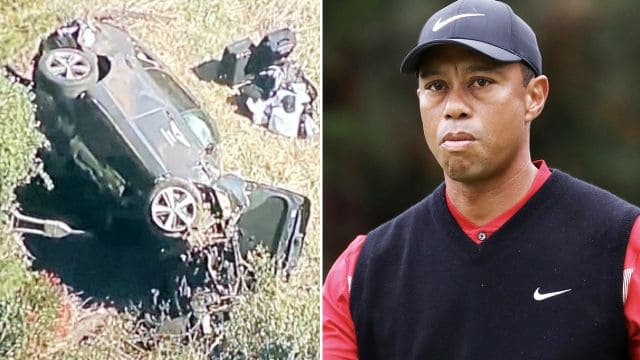 According to a statement posted on the official Twitter account Golf, Legend Tiger Woods is now conscious and recovering after surgery.

Tiger Woods had met a severe car accident in Los Angeles on Monday. The Twitter statement said that now he is responsive.

Authorities said that Woods was involved in a serious car accident. His one-vehicle rollover had crashed on California road at a stretch known for speeding and accidents. The emergency team responded to the accident site. According to the authorities, Woods was conscious at that time but was trapped in the vehicle. He suffered serious leg injuries.

The 45 years old golf legend left at around 7 am PT in Rancho Palos Verdes near Los Angeles. The SUV that Woods was driving landed on its side at the roadway. The SUV went across two lanes and then hit a curb and tree and finally crashed.

Los Angeles County Sheriff’s deputy was the first who responded to the accident site. According to the deputy Woods was still on tied on the car seat buckled in a seat belt. He was conscious at the moment. He even mentioned that his name was Tiger to the deputy.

Deputy Carlos Gonzalez said that Woods seem lucid and calm but was also in shock at the moment. The golfer also appeared if he is not concerned with the injuries he received.

According to Daryl Osby, Fire Chief at Los Angeles County, Woods was trying hard to self-extricate but was stuck in the vehicle. He was alert and oriented after the severe accident. He was then rescued by the firefighters who made use of an axe and a pry bar to free the golfer.

Woods had hosted a PGA Tour event in that area last weekend. He himself didn’t participated because of a back surgery recently.

The windshield was breaking open using the axe. Osby said that the golfer was stuck in the car seat. The pry bar was used to pry the seats and metals from and around Woods legs.

Osby added that the golfer was put in a neck collar, leg splints were attached, and finally was taken out through the hole in the windshield by using a backboard. He was then put in an ambulance. He suffered serious leg injuries when taken to hospital. But the player was in a stable condition.

Deputy Gonzalez and Sheriff Alex Villanueva both agreed that the accident could have been fatal. Woods survive the accident because of the seatbelt and the airbags in his SUV. The accident has completely destroyed the front of his SUV.

The Sheriff speculated that Woods might be driving at a high speed that too on the downside of a hilly part of the road that resulted in the crash. Sheriff Villanueva also added that no skid marks or any other signs of braking were present.

The particular location at the California road had a bad reputation for speeding and accidents. That section of the road is on a downhill curve.

According to law enforcement information Woods was not given any field sobriety test because of his severe injuries.

Woods was carried to the Harbor-UCLA Medical Center. According to the Los Angeles County Sheriff, there was no other occupant in the car.

Woods was heading for the Rolling Hills Country Club for shooting. He himself was not playing or hitting because of the back surgery. But the golf legend was giving some on-course lessons to celebrities. Woods was awaiting one more MRI scan for his recent back surgery.

He is now awake and recovering from the leg injuries.