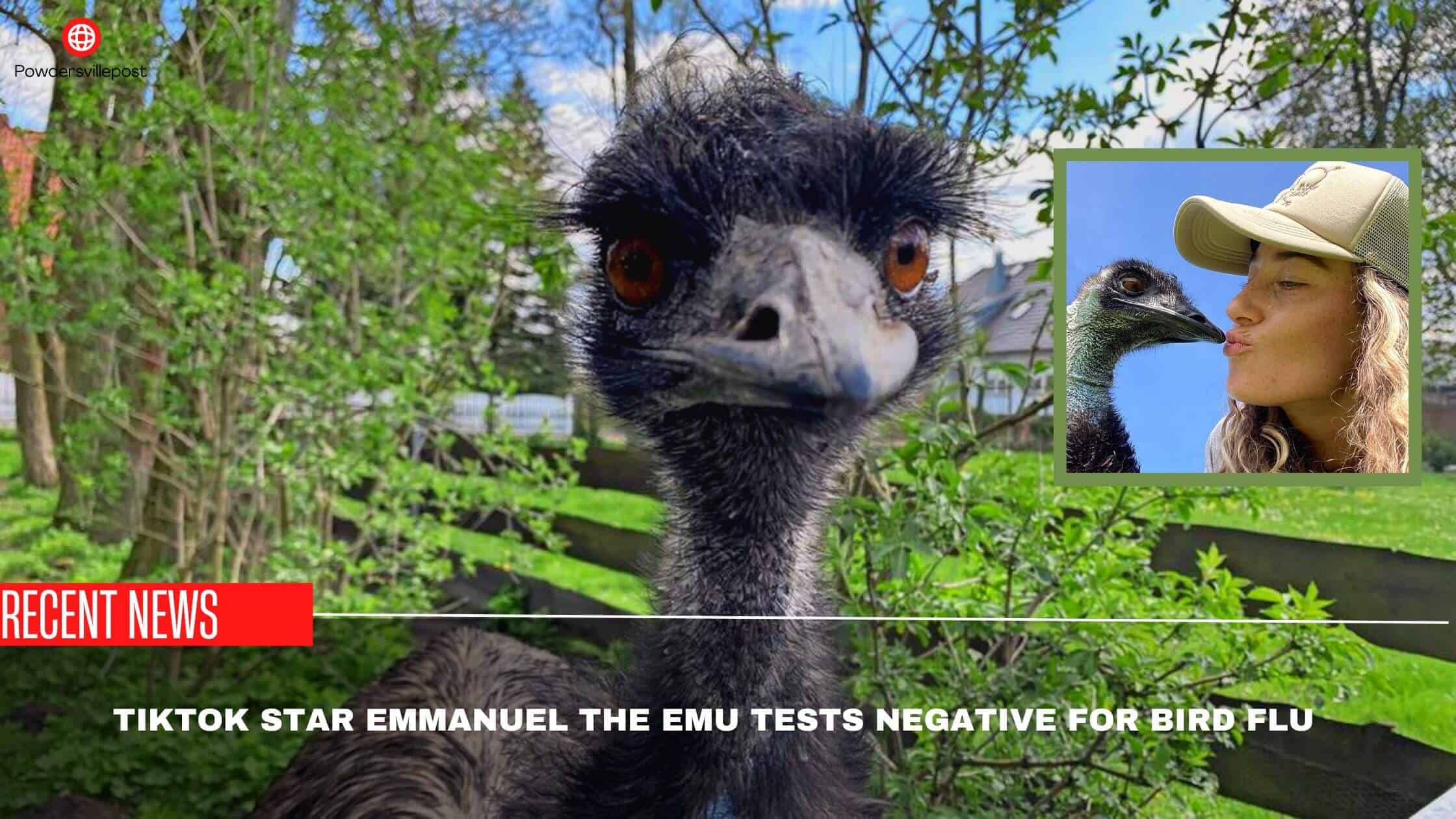 Viral TikTok sensation Emmanuel the emu is doing well and has not contracted the deadly Avian Influenza virus as previously thought by her owner Taylor Blake.

The ungovernable avian, famous for his defiant strut-about on camera, has recently tested negative for AI after the virus scare on Saturday 15th Oct. “Emmanuel Todd Lopez tested negative for Avian Influenza at 2 separate labs, swab, fecal, and blood. He does not have the virus and is not actively shedding the virus,” tweeted Blake that day.

What Is The Response Of His Fans?

Fans had been showering Blake’s Twitter with moving messages of their thoughts and prayers for the speedy recovery and survival of the star member of her farm. Many others criticized the photos she uploaded where Blake was seen caressing and kissing the sick animal.

“Being face to face with a bird with avian flu is a bad idea – this is how zoonotic transmissions occur, this is why entire farms cull sick birds. We live with the threat of pandemic flu” tweeted Dr. Boghuma Kabisen Titanji.

“If your emu (or any bird) has avian influenza, do not kiss it. Do not cuddle with it. Do not touch it. Bird flu is extremely dangerous to humans and other animals. And it sounds harsh, but to prevent its spread, birds that get avian flu should be euthanized” says Dr. Angela Rasmussen, who is a virologist and research scientist at the Vaccine and Infectious Disease Organization in Canada.

Blake responded to many of these backlashes with her tweet: “We are constantly sanitizing and washing our hands, clothes, and bodies. Emmanuel Freaks out whenever we approach him wearing a mask. He does not understand and it is extremely stressful for him. I am not going to put more stress on him”.

Who is Emmanuel the emu?

Emmanuel is one of the residents of Taylor Blake’s ‘Knuckle Bump Farms in South Florida. Both he and his owner Blake shot to fame on TikTok as a few videos featuring Emmanuel’s nosy behavior went viral on the social media platform. Blake routinely posts farm videos featuring educational tips on raising animals. The audacious emu ‘Emmanuel’ is seen strutting into the camera frame as Blake records her farm videos and defiantly starts plucking towards the recording camera while the owner repeatedly yells “Emmanuel Don’t Do It!” (which has become a catchphrase meme) adored and shared by thousands of users who couldn’t get enough of the bird’s persistence on interrupting his owner.

Several videos where Emmanuel shows his charismatic irreverence by going after the camera, again and again, once even succeeding to knock it down, have even inspired a cult following of viewers who were completely won over by the big bird Moxy.

Things took an ugly turn in the happy-going Knuckle Bump Farms recently where more than 50 birds died in just three days following what Blake believes was the introduction of avian influenza via wild Egyptian geese that invaded their farms. The remaining birds in her flock had to be euthanized by the state and Blake feels that this has highly stressed Emmanuel as he stopped eating the day they depopulated their flock.

She also added that their farm was in a 150-day quarantine and that she has taken every precaution recommended by the FDA.

Blast from the Past – Racism allegations?

A fierce twitter drama ensued with many users accusing Blake of just using the poor sick bird for getting attention. Some users compared it to her prior clout-chasing attempts to go viral several times over the past 10 years including her loathsome performance of a stereotypical white supremacist “Karen” character.

This was followed by another section of Twitter users who started sharing screenshots of racist tweets dating back from 2011 onwards, that appeared to be posted from Blake’s account.

Blake is yet to officially respond to these serious allegations, however, her choice to censor some of these tweets by blocking them on Twitter cannot be seen as helping her case in any way.

The bird Flu epidemic in America

Avian Influenza was detected in Florida as early as January and has also been found in other states including Kentucky, New York, Virginia, Delaware, Indiana, Maine, Michigan, and Nebraska.

Avian flu can be transmitted to humans, although rare, through contaminated equipment and direct contact.

The CDC states that avian flu in humans can range in severity from no symptoms or mild illness to severe disease that can result in death. When a virus jumps from birds to humans, the germs could undergo genetic changes and spread more easily from person to person, which can lead to a pandemic outbreak.

However, there is no reason to arouse panic as the swift actions of the state departments in quarantining the affected areas and issuing strict guidelines of conduct to curb the spread has been successful so far.