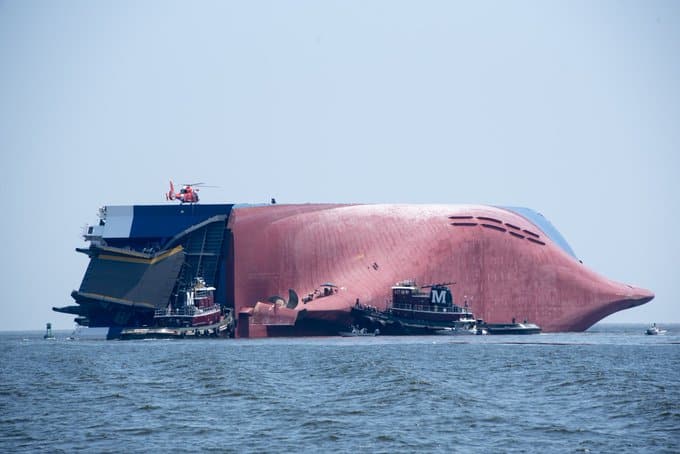 Crew members and ship owners speak publicly about the moments before the Golden Ray listed, overturned, and triggered a multi-day rescue effort to save the 24 people on board for the first time in the year since a 656-foot cargo vessel capsized off the coast of Georgia.

Since September 8, 2019, the vessel has remained on its side in St. Simons Sound — with its load of more than 4,000 vehicles still inside. The weather and Covid-19 related problems, the intention to get it cut into bits and hauled away, is currently halted until early October. There was nothing unusual with the ship, and it was looking normal, but it caused a huge surprise the moment it capsized. A public hearing wraps up on Tuesday as part of the inquiry into why the vessel capsized.

The pilot who steered the ship out of the port at 1 a.m. and Captain Jonathan Tennant, Reminded of calm winds and decent visibility on September 8, 2019. He said that when something is wrong, there are usually warning signs — alarms, the sound of crew members speaking rapidly in a native language, the engine room calling up. Yet none of that has occurred. The captain told that it all looked natural and there was no sign of anything unusual with the ship. The crew members were all fit and had noticed nothing that would cause them to hit the alarm.

The ship began leaning in turn and began to over-rotate to starboard, Tennant told investigators. To decrease the rate of the turn, he applied what is known as a counter-rudder, but it was not enough. He said that the accident occurred in a matter of seconds. When I felt like I was losing control of the vessel, I reached the ship’s radio behind me, and I said to Jamie at the door, ‘Look out, Jamie. I’m losing her,’ I dropped the radio at the time she capsized, kept on to the gyro, capsized the ship, tried to ease the rudder, still trying to move the ship.

In order not to fall down to the end of the engine room, I caught him because the engine room was a little bit longer, and if he falls to his end, he could be wounded. So, I’m trying to catch him so that he doesn’t fall before the end of it. The generator went out, Kim said, the engine shut down, and the backup generator went out as well. He mentioned rising water and being extremely hot in the room—the US Coast Guard’s Capt. John Reed separately testified that the within hit more than 150 degrees, with passages being a death trap. Originally, the Golden Ray was expected to travel to several ports in the USA from Mexico, ending in Wilmington, North Carolina. Hurricane Dorian altered its preparations slightly.

Leaving the port in Texas, there was a wait, during which the route shifted to Jacksonville, Florida, until Brunswick, Georgia. Mike Mavrinac, operations manager for ship owner Hyundai Glovis, was asked by investigators about those changes and any problems with loading or unloading cargo. Mavrinac said we had tighter space at the Port of Brunswick, and we added some extra cargo downstairs on the main deck, Deck Five. One of the investigative bodies, the Korean Maritime Safety Tribunal, challenged Mavrinac not to have a final load schedule supplied to the vessel prior to departure. Mavrinac pushed back, saying that the stevedore normally hands the crew a handwritten schedule and that the crew uses that to account for the present cargo.

Sammy Maataki of Norton Lilly, the man in charge of designing a loading and unloading strategy, said there was ultimately less cargo loaded on deck 12 and more vehicles loaded out of Brunswick on deck five. There was lack of room for guessing, they ran out of space, so the rest of the balance was set at five, Maataki said. An investigator from the National Transportation Safety Board questioned if Maataki took into account the disparity in weight between the unloaded cars and the new ones brought on board. Also further adding to his statement Mataaki informed No, as I said, we’re getting a proposal from Mexico that reflects the shipment to be discharged between the Gulf and the East Coast. And we just position it in a way where it is an effective load and discharge process, based on the space that is available at the load port.

It has also delayed the process of retrieving the stranded vessel. Ten salvage crew members have tested positive for Covid-19, and 50 have been quarantined. Any of the people who tested positive, including salvage and support staff, are vital to the project. At present, no one remains isolated or in quarantine. In late July, the removal process was halted, with a restart planned in early October. During the break, ongoing support activities have continued, including teams ensuring that any oil spills are detected quickly and remediated to the greatest extent possible. Part of the Covid-19 contingency strategy includes making salvage crew members sequester for two weeks before being housed in an installation for the full length of the removal process, which is estimated to be around eight weeks when the project restarts. Also further, it was added by one of the officers that the investigation is going to be complex and lengthy and will take a lot of time to complete.