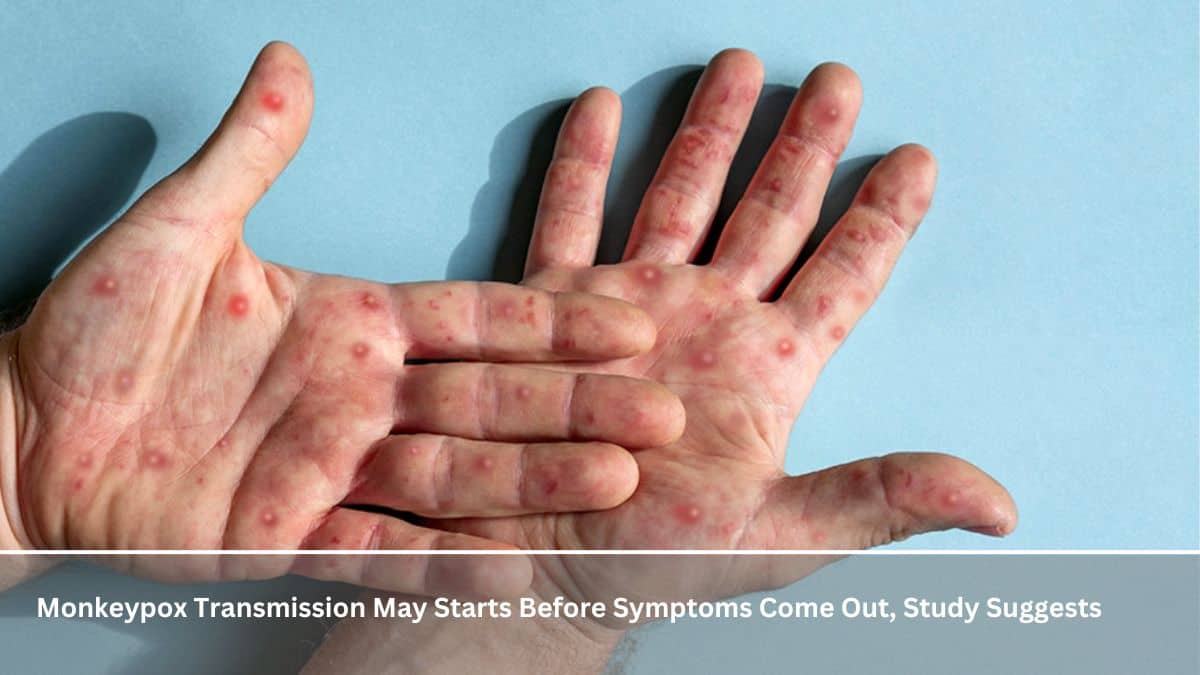 A recent study done by the UK Health Security Agency found that Monkeypox can spread to others before the symptoms start to show. This makes it hard to stop the spread of the disease. The study was published in The BMJ journal and it is contrary to the existing guidelines on the spread of monkeypox.

One of the major countries that face monkeypox spread is the Democratic Republic of Congo where it mostly infects children from rural hunting villages. Here, the transmission happens as most of these families live in close proximity. The current outbreak we see in other countries are mainly arising out of sexual relations among men and this has shifted the transmission routes.

Alert: More Than 50% Of Cases Are Spread Before Symptoms Appear!

According to Bill Hanage, an epidemiologist from the Harvard T.H. Chan School of Public Health says that poxviruses have a common tendency to transmit to other persons before the advent of symptoms. Although he was not part of the study he told that for the past couple of months, we have reached a point of realization that the infections are mostly concerned with sexual transmissions and if this is the case, then the instances of pre-symptomatic transmissions are definitely possible.

Hanage said that this possibly explains the huge outbreak of the disease as most people aren’t aware that they are carrying the virus within them.

🔵 An Overview Of Monkeypox Outbreaks In African Union Countries

According to the US Centers for Disease Control and Prevention (CDC), the Monkeypox virus has affected around 75,000 people globally since May 2022. Among those almost 99 percent of cases have been reported in countries where the poxvirus wasn’t common until now. However, the Monkeypox cases in the US have dropped drastically from the mid-2022 scenario when almost 446 cases were reported during the month of August.

Now it has dropped to 30 per day according to last week’s average in October. There have been a total of 28,492 cases reported in the US as of Wednesday and the lower infection rates point to an efficient public sensitization and vaccination drive that is happening all through America.

But the current guidelines on the CDC website say that the Monkeypox virus spreads after the infected person starts showing symptoms. This has been in accordance with the information shared by WHO and UK government too.

The CDC usually doesn’t update any information until there have been more studies and research on matters of public health. So regarding the findings of the new study, it is to be observed that more research on the same topic would bring out similar results.

As part of the study, the researchers collected data from 2,746 monkeypox cases in the UK. The researchers then started to isolate cases that had linked contacts who were also infected and were confirmed by PCR tests and had records on the date of getting the symptoms. After the analysis of these reports, they found out that the incubation period was longer than the window between the start of symptoms in a person and their linked contact.

They concluded that more than half of the transmissions in the UK had happened in the presymptomatic stage of the infection. The transmissions occurred almost four days prior to the surfacing of symptoms like headache, swollen lymph nodes, fever, rash, and muscle aches. A painful swelling of the rectum area called Proctitis can also happen in monkeypox infections.